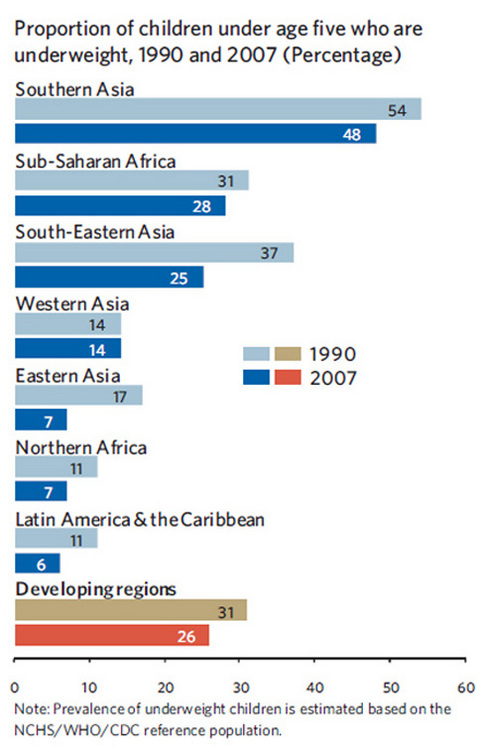 This chart shows a key indicator for malnutrition—underweight children from birth to five years. In developing regions, the proportion of children under five years old who are undernourished declined from 33 per cent in 1990 to 26 per cent in 2006, but 140 million children in developing countries were recorded as underweight in 2006. According to public health experts, undernourishment among young children is a sound indicator of inadequate nutrition in the population as a whole. As the 2009 MDG report states, "Adequate nutrition is vital for building children's immune systems and for their motor and cognitive development…The consequences can be fatal: more than one third of child deaths worldwide are attributable to undernutrition." (p. 12) Eastern Asia, and China in particular, reduced the percentage of underweight children between 1990 and 2006 by more than half. In Southern Asia, despite progress since 1990, almost half of young children are underweight. In Sub-saharan Africa, there has been insufficient progress, where more than a quarter of the region's children are underweight. Urban children are half as likely to be underweight as rural children in the same country. In Eastern Asia, where improvement has occurred, inadequate nutrition is still almost five times as high in rural areas. Notable in these statistics is the progress recorded for Latin America and the Caribbean, Northern Africa, and parts of Asia. There has been no significant progress in Western Asia, a likely result of the large number of refugees and conflict.

Overall worldwide progress is already insufficient to achieve the MDG goal to eradicate extreme poverty and hunger by 2015. In developing regions between 1990 and 2007, a 5 percentage point decline in the proportion of underweight children under five years of age was achieved, leaving over a quarter of all children in these regions underfed. Progress in reducing hunger is being slowed or reversed by rising food prices due to changing diets, economic growth, a population increases, urbanization, poor agricultural policies, and use of food crops for biofuel.