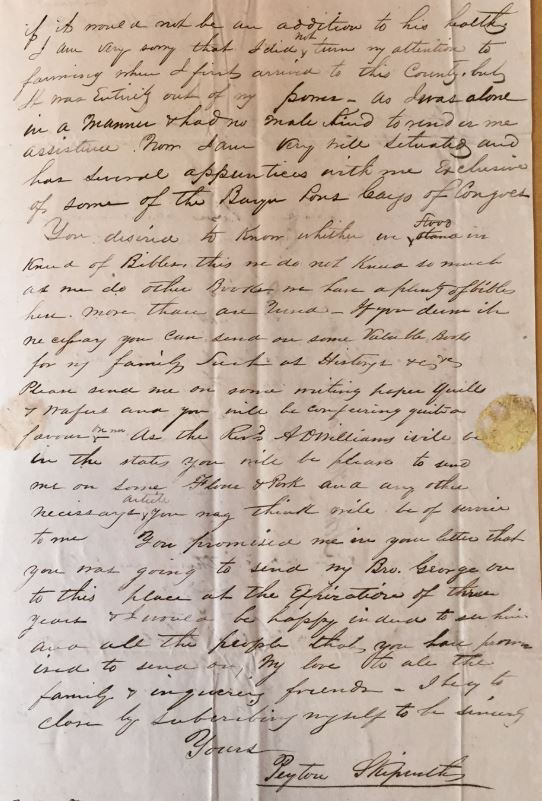 “Liberian Letters will fascinate teachers and students interested in the late history of slavery, manumission, and repatriation of people of African descent to Sub-Saharan coasts.”

This collection features more than 50 letters from freed American slaves living in 19th-century Liberia, West Africa, to their former masters and associates in Virginia.

The American Colonization Society (ACS) hatched the idea of creating Liberia, whose name comes from the Latin term liber, meaning “free.” Founded in 1816, the ACS advocated sending manumitted slaves and free blacks living in the United States to Africa. An odd amalgam of financiers backed ACS efforts. Some were abolitionists; others were slave owners whose motives were far from altruistic. Although their solution to America’s race problem entailed gradually ending the cruel institution of slavery, they did not believe that blacks could coexist with whites.

Agents of the ACS selected a strip of territory along the West African coast for “repatriation” settlement. In many cases they seized the land of indigenous communities, occasionally offering paid compensation for Africans losing land, and trade networks. The first black emigrants from America landed in 1821 and experienced serious difficulties. They were not prepared to till the land and the local, displaced Africans were hostile. Most importantly, the American-born blacks had no exposure to tropical diseases and were highly susceptible to malaria and yellow fever. When the settlers declared independence for Liberia in 1847, severing formal ties with the ACS, they numbered only a few thousand.

This site offers the opinions of surviving pioneers, including six compelling letters authored in 1834 and 1835 by Samson Ceasar, a freed slave, who wrote to David Haselden and Henry Westfall of Buchannon, Virginia. An additional 44 letters were sent by former slaves of James Hunter Terrell to Terrell’s executor, Dr. James Minor, between 1857 and 1866. Letters to relatives in the United States and letters from the United States are not available on this site.

“Resources” offers additional material, such as a roll of emigrants, including Samson Ceasar; topographic and residential maps; and several links to relevant websites. Of special interest is the Liberia Page of the African Studies Program at the University of Pennsylvania. Within that site, the Liberia page by Karen Fung offers a superb history of the American Colonization Society from 1816 to 1867. Also in “Resources,” an original introduction to the Terrell letters, written by a Terrell family associate, describes American blacks in Liberia as “childlike and dependent people.” Unfortunately, the University of Virginia does not contextualize or explain the racial implications of this stereotype.

Despite its shortcomings, “Liberian Letters” will fascinate teachers and students interested in the late history of slavery, manumission, and repatriation of people of African descent to Sub-Saharan coasts. The correspondence shows what a difficult crossroad the 19th century was for slaves breaking chains and moving back to what they were told (and in many cases believed) was their mother continent. The diverse letters not only reflect the complex bonds between former slaves and masters, but underscore the persistently unequal relationship. The ACS provided settlers with six months of food and home-building supplies, but after this initial grant of provisions, the emigrants were on their own. From the first day in their new land, they faced deadly illness and resistance from indigenous African societies. For decades, the unwavering allies of Liberia were American segregationists who believed that blacks shipped to Africa would never return to their country of birth to live with “whites” in Virginia or the rest of the fledgling American republic.