Lady of the Bridge, Tale of Genji Painting Scroll 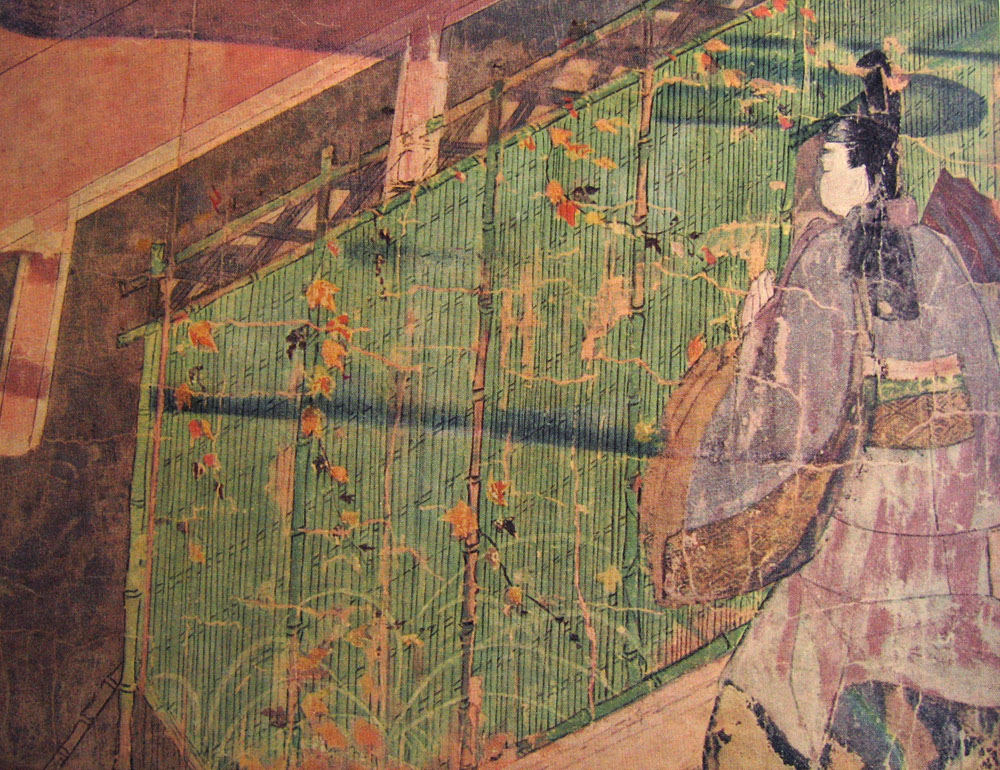 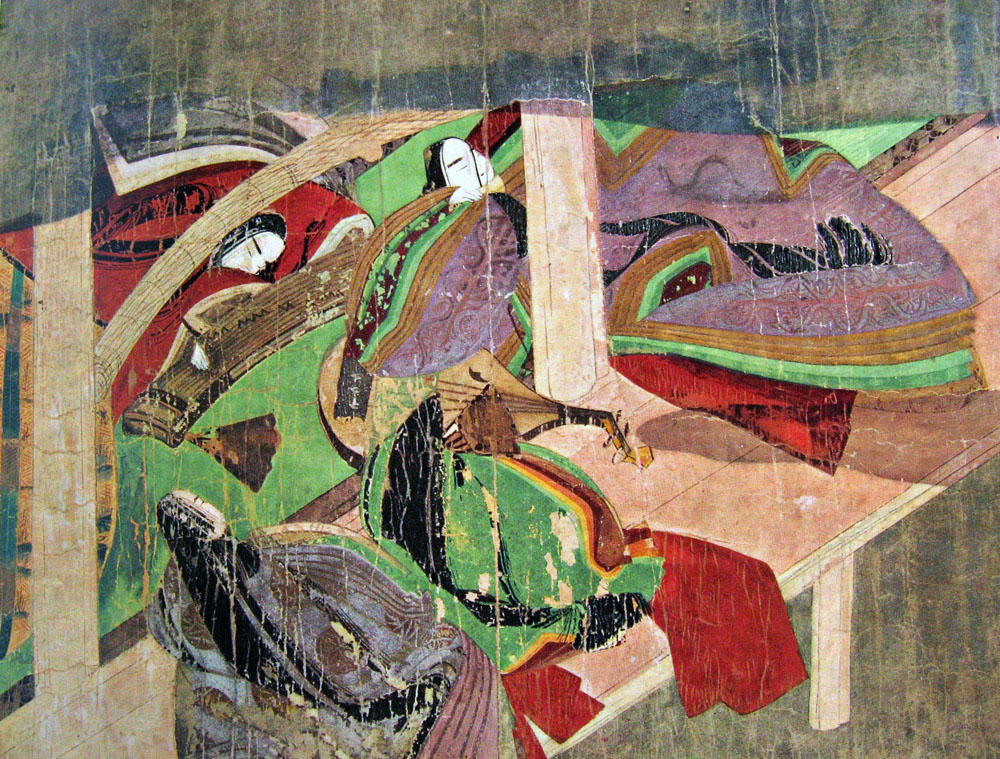 The greatest work produced during the Heian era was The Tale of Genji by Murasaki Shikibu, lady-in-waiting to Empress Akiko. Considered the world’s first novel, Genji is written as an absorbing portrait of Heian court life, the splendor of its rituals, and aesthetic culture. The Tale of Genji has been, through the centuries, the subject of visual illustration and dramatization, from paintings to modern full-length films, cartoons, and animé.

The pictures here are from the 12th-century Tale of Genji Painting Scroll (Genji monogatari emaki), which was created over a century after Murasaki Shikibu’s literary work, but is one of the oldest surviving illustrations of it. Only four of the original ten scrolls have come down to us (20 paintings and some 70 fragments of calligraphic text) and the paintings are severely damaged, with layers of paint peeling off, faded, or completely gone in places. Nevertheless, they remain an invaluable historical source today on how readers then visualized the novel, which particular scenes they thought should be illustrated and which passages excerpted. The pictures also constitute visual evidence of court costumes, interior furnishings, and court manners, as well as the way in which faces are depicted in a stylized fashion.

For our purposes, it is sufficient to notice such aspects as the women’s elaborate silk robes, which could be from six to twelve layers in all, depending on the weather and the formality of the occasion. An indication of a lady’s cultivation and taste, the set of robes—each layer shorter than the last at the hem and sleeves—aimed to create a distinctive color harmony and aesthetic effect appropriate to the season and occasion, and is also an index to the wearer’s creativity. Note the openness of Heian-period architecture: latticed windows and wall panels could be taken away, leaving only bamboo blinds to screen the interior.

A scene set in the autumn night is depicted from the Lady of the Bridge (Hashihime) chapter, where the hero of the novel’s last ten chapters, Kaoru, has pushed the bamboo fence slightly ajar in order to glimpse the two Uji princesses, _igimi and Nakanokimi, as they sit by the veranda, wholly absorbed in playing music under the autumn moonlight. Music, along with calligraphy and poetry, was one of the three most important feminine accomplishments. Unfortunately, the silver moon in the upper-right-hand corner has tarnished to a brownish grey, as has the originally bluish-silver mist floating in a band across the upper part of the picture. This scene is the climax of the Lady of the Bridge chapter, for it depicts the moment when Kaoru falls in love with _igimi after hearing her playing the zither (the koto; she is shown behind her younger sister, the inclination of her head and body evoking an attitude of complete absorption in the music) and glimpsing her face and manners, which indicate a refinement and proud nobility unexpected for someone brought up in an obscure village. This fateful glimpse deflects Kaoru from his determined pursuit of the Buddhist path, and initiates a tragic story about the futility of desire. The younger sister, Nakanokimi, is described this way:

Half hidden by a pillar, one had a lute before her and sat toying with the plectrum. Just then the moon burst forth in all its brilliance.
“Well now,” she said. “This does quite well as a fan for bringing out the moon.” The upraised face was bright and lively.
The other, leaning against an armrest, had a koto before her. “I have heard that you summon the sun with one of those objects, but you seem to have ideas of your own on how to use it.” She was smiling, a melancholy, contemplative sort of smile.
“I may be asking too much, I admit, but you have to admit that lutes and moons are related.”
It was a charming scene, utterly unlike what Kaoru had imagined from afar.