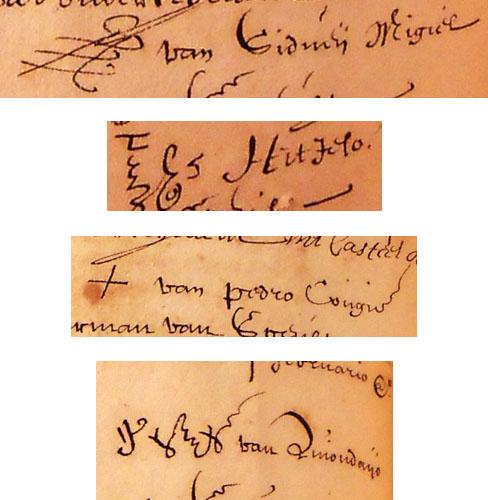 The Amboyna trial was a famous conspiracy case that took place in 1623 when a group of Japanese mercenaries were accused of plotting with English merchants to seize control of a Dutch fort on a remote island in Southeast Asia. Despite occurring thousands of miles away in an unfamiliar part of the world, the trial on Amboyna swiftly escalated to become one of the most famous legal cases of the age and the subject of a long-running dispute between the Dutch and the English governments.

A total of 11 mercenaries signed the judicial documents at Amboyna although some were clearly not literate and marked the document with a cross. The names of the 11 are as follows:

We don't have the original signatures but rather a copy made by a Dutch scribe in the immediate aftermath of the incident. Although decipherable, it is clear that the Dutch scribe struggled to reproduce the complex Chinese characters for 七蔵 (Shichizo) and other recruits. The scribe was clearly far more comfortable with Sidney Migiell’s signature, a sweeping, self-confident, Europeanized scrawl that looks similar to the extravagant signatures used by VOC officials. These signatures are interesting because they show the very different backgrounds of some of these soldiers. For example, Sidney Migiell was likely a Christian convert while Thomas Corea, although listed as Japanese, was probably a Korean captive brought to Japan in the aftermath of Hideyoshi's invasion.