Japanese Illustrated Books from the Edo and Meiji Periods

The Japanese Illustrated Books from the Edo and Meiji Periods is a digitized archive of over 1,000 rare volumes in the Smithsonian collection. Spanning over three hundred years of Japanese book history, the collection includes famous Edo period (1603-1868) artists such as Andō Hiroshige (1797-1858) and Katsushika Hokusai (1760-1849). The Meiji period (1868-1912) publications illustrate the shifts and continuations in Japanese aesthetic practices during a new imperial era. The books span hand-colored and color woodblock printed volumes as well as hand-written kana books. Subject matter include: flower, bird, and landscape prints; figural domestic scenes and bird’s-eye-view depictions of agrarian labor; samurai crests; and Noh theatre song books.

The core of the Japanese Illustrated Books from the Edo and Meiji Periods come from the collection of American industrialist and art collector Charles Lang Freer (1854-1919) and 67 volumes are those of art collector Robert O. Muller (1911-2003). While both collections are physically held and available to view at the Freer|Sackler Library, this website is a great resource for students and scholars of Japanese print history, book history, and publishing outside the metro D.C. area.

Importantly, site navigation for the Japanese Illustrated Books differs from site navigation for the Smithsonian’s European and American digitized books: scrolling through each volume is calibrated to simulate Japanese reading practices. Firstly, the left arrow is used to progress to the next page rather than the right arrow. Secondly, the scans are made as two-page spreads to seamlessly illustrate printed images across both pages, as Japanese woodcut printing and bookbinding practices differed from European methods. Instructors may use this site to illustrate Japan and Euro-America’s political and cultural relationship before and after Commodore Perry’s opening of Japan in 1853, for example. Other topics might include: the commercial enterprise of making and collecting printed Japanese books; Japanese art and Europe’s World’s Fairs; their impact on artists like Mary Cassat and Vincent Van Gogh, both of whom collected Japanese prints.

In addition, instructors may find this site useful as a material resource in charting the circulation of visual and textual knowledge throughout Japan’s shifts in political power. A possible shortcoming of the site is that while several collection titles have been translated, the vast majority have only been transliterated. Also, the site does not include explanatory essays on Japan’s history and visual culture. Luckily, the Gerhard Pulverer Collection of Illustrated Japanese Books, also a digitized Smithsonian collection, includes essays and videos on these topics which would complement a comprehensive lesson plan. 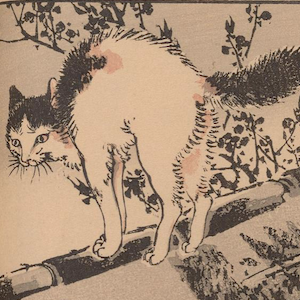