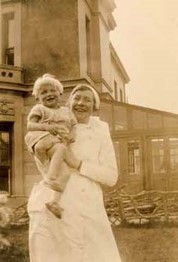 “At its heart is a collection of "Photographs", "Case files", and "Learning materials" from one of the many philanthropic societies dedicated to the care of children in Britain at this period.”

Hidden Lives Revealed: A Virtual Archive – Children in Care 1881-1918 is an attractive and well-organized website. It bills itself as an "intriguing encounter with children who were in the care of the Children's Society in late Victorian and early 20th-century Britain."

At its heart is a collection of "Photographs", "Case files", and "Learning materials" from one of the many philanthropic societies dedicated to the care of children in Britain at this period. Most of the archive material was previously unavailable to the public, as might be expected with files giving personal details of children who were in care – though of course the anonymity of the children is respected. "No other Internet archive," it asserts, "gives you the opportunity to browse through such unique material – a kind of resource which has the type of information not recorded elsewhere."

Perhaps this is so. In any case, it can claim quite reasonably that it offers something for those studying Victorian history or for university students interested in social work. The Waifs and Strays' Society, later known as the Children's Society, is rather overshadowed in the history books by the Barnardo Homes: further proof, if needed, of the aggressive publicity campaigns that have earned Dr. Barnardo a certain notoriety among historians.1

A brief History of the Waifs and Strays' Society in a section of the website entitled "Articles" usefully provides background information. (A link to the website of today's The Children's Society provides further details for those interested.) The Society was founded in London in 1881 by a civil servant and Sunday school teacher named Edward Rudolf.

Rudolf aimed to set up a central home for the poorest and most neglected children cared for by the Church of England. It made a particular point of integrating its homes with the local community, aided by the parish organizations of the Anglican church. Other articles, incidentally, give a short biography of the founder, and introductions to poverty, juvenile delinquency and reformatories during the Victorian era. There is a concise "Bibliography" in these areas as well.2

"Photographs" is divided into 12 sections, covering such areas as the work, schooling, pets, clothing, illnesses and disabilities, and sporting activities. Each photograph is carefully documented with a date, location, creator, and description. "Homes" includes photographs and a detailed description. By 1918 the society had a total of 175 homes. These photographs inevitably look a bit grim now, though the society did have a policy of providing a family atmosphere in homes of around 10 children aged five to 14.

The sample of about 150 "Case files" will interest those who want a feel for historical research. Each one contains the detailed application form, including information on family background, health, education, current circumstances, and reasons for application. There is also interesting supplementary material in the form of personal letters, photographs, and school reports. All of these documents are reproduced in the original, and (mercifully) transcribed in print form. They can be browsed by keyword, running from "Abandonment" to "World War I ."

An example from a search for "Running Away" documents a girl who ran away from a home in Croydon, claiming ill treatment and concerns about having her hair cut off because of lice. The file even includes a reproduction of a Christmas card sent by her brother in 1891. Finally, there is a collection of "Learning materials", with exercises to find out "what it was like to be REALLY poor in Victorian and Edwardian times." A sub-section, entitled "Rescued from Poverty" has, for example, a fact file and questions for students concerning life on the streets and "who would you choose?"

Inevitably with this kind of website, the society responsible gives a positive view of its activities. One might wish to ask further questions such as: whether the laundries and other commercial activities in the homes risked becoming exploitative, the relations between children and those running the homes, and why the photographs suggest that all the girls became maids and the boys soldiers! All the same, the Society is to be commended for providing a very approachable educational site, and for its innovative approach to publicizing its existence.