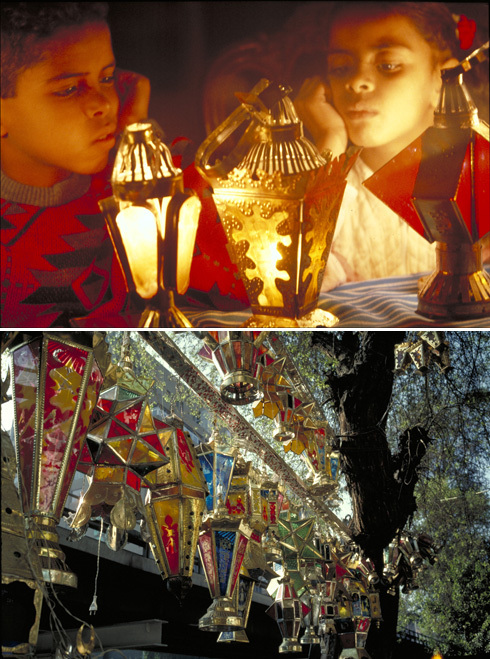 The photograph at the top shows two children gazing into the soft light of a fanoos [fan-NOOS], or traditional Ramadan lantern. In the photograph below, Ramadan lanterns are hung outside a shop in a section of medieval Cairo. As far as is known, the tradition originated in Egypt, perhaps as long ago as pharaonic times, when it may have announced the Nile flood. The tradition in its current form may date to the Fatimid period (969-1171 CE). It isn’t clear when the custom became associated with the Islamic holiday of Ramadan, the ninth month of the Islamic lunar calendar, when Muslims keep the fast from dawn to sunset. Indeed, lanterns and lamps of various kinds, of many hues and degrees of brightness, and even both real and imaginary, have always been special to Egypt. For centuries before the coming of electricity, Cairo itself was noted for its spectacular use of lanterns to illuminate the city, especially during the holy month of Ramadan.

The tradition of the colorful lanterns is coupled with the song, which children sing as they process through the streets of Egyptian, and especially Cairene neighborhoods announcing the coming of Ramadan, and collecting coins and sweets. The words of the song that are not translated are obscure, perhaps referring to fire or light (wahawi, ya wahawi). "You have gone, O Sha'ban" refers to the lunar month before Ramadan, and "the daughter of the Sultan is wearing her caftan" means she is dressed in a loose, often embroidered garment worn when going out and on holidays. "Give us this season's gift" is a plea for the small presents children would receive from adults for going out in procession to announce the coming of Ramadan.

Children are typically very excited about the coming of Ramadan, because it is a festive time that lasts an entire month. Even though abstaining from food and drink daily from dawn to sunset is a hardship, many children are anxious to participate as much as they can, fasting part of the day or just a few days. Some manage to fast the whole month by the age of ten or so. After sunset each day, in contrast, special, abundant food, friends and family, and evening activities, including visits to the mosque (Arabic, masjid) take place. Ramadan culminates in the major festival called Eid al-Fitr at the end of the month. Children traditionally receive new shoes and clothing, money, sweets and toys as a reward for just trying, or accomplishing the fast.