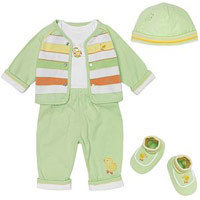 The material culture of early childhood in the 21st century is characterized by an emphasis on biological age and related levels of cognitive and motor skill development. All types of objects, including diapers, toys, food products, and clothing, are divided into categories based on the age-appropriateness of a particular object. Descriptions of these categories commonly explain how each object functions to enable a child to attain a particular skill or reach a developmental milestone. Appeals to medical and developmental science are common. Clothing is often marketed for its ability to facilitate different types of developmental movements such as crawling, walking, or rolling over. Children's clothing is also noteworthy for its emphasis on marking very young individuals with their gender. Properly color coding children into pink for girls and blue for boys is of paramount concern in the clothing industry. Similarly, patterns reflect particular gender ideals. It is very difficult, for example, to find a girl's outfit that has a plaid pattern or a car on it, even in pink, or a boys outfit that has a floral pattern or an image of a doll. This type of gender coding at a very young age is culturally important when children are introduced socially into the world- it is a major social gaffe to misidentify a child's gender but if it occurs it is usually because the child is dressed in a gender-neutral color such as yellow or green. Children's clothing points to the importance of gender in our culture, and also the ways that gender roles are taught to children from birth.

This source is a part of the Material Culture and Childhood (20th c.) teaching module.