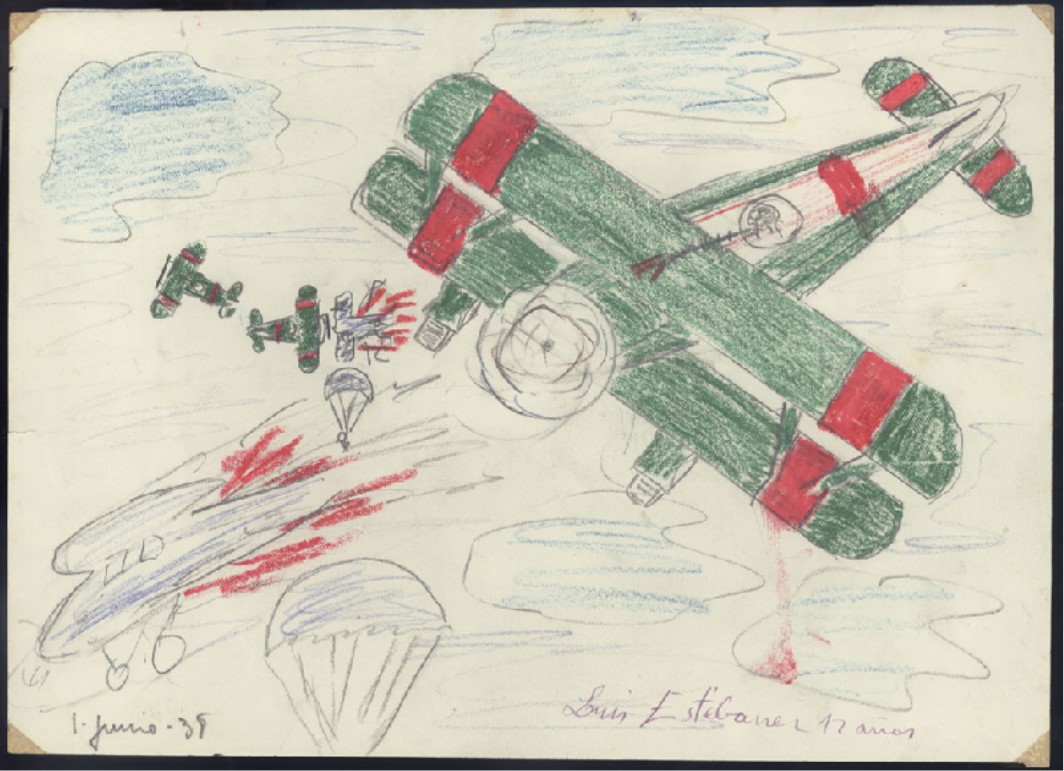 “In short, this is a potentially interesting collection that gives a child's perspective on the war, but from a teacher's point of view, there is very little help in ways of deploying it in the classroom.”

Children's Drawings of the Spanish Civil War of 1936-1939 were produced by children evacuated from the war zones to 'colonies' in other parts of Spain and in southern France. The drawings depict subjects such as the bombing of villages, battle scenes with tanks and planes, events during the evacuations, and daily life in the colonies (or the past). A combined effort by the Spanish Board of Education and the Carnegie Institute of Spain led to the assemblage of a large collection of drawings during the war. Some of these drawings were sent to the United States in 1938 by Joseph A. Weissberger to support a campaign by the American Friends Service Committee to raise funds for further evacuations. The Quaker organization published a collection of 60 of drawings, under the title of And They Still Draw Pictures! (c. 1938), with a prologue by Aldous Huxley. Subsequently the drawings were dispersed among a number of institutions, the majority (609) went to the University of California at San Diego. The 153 drawings accessible on this web site were bequeathed to Columbia University in 1938 by a benefactor who, it is assumed, purchased them at an exhibition earlier that year. They later became part of the collection of the Avery Architectural and Fine Arts Library. As it happened, a former director of the Library, Angela Giral, was herself an evacuee from the Civil War. In a personal note, she cited Joseph Weissberger's description of the drawings as 'autobiographic pages of un-kept diaries'.

One can browse the collection in three ways: via the whole collection; the children's names; or the provinces where they resided as evacuees. This is helpful for family members trying to trace the work of relatives, but a thematic classification might have been more useful for teachers and researchers. The click of a mouse allows the browser to see a reasonably large version of each drawing, with the detail visible and the colors of the crayons used by the children vividly reproduced. There is also a caption giving the name and (where known) the age of the child, the colony to which they had been moved, and a brief description of the content in Spanish and English. Thus No. 22 explains: "This scene shows the day of the evacuation when, as we were about to climb into the train, we saw an airplane that was already firing and we had to go to a shelter nearby." Drawn by children between the ages of seven and fourteen, the pictures exhibited a considerable disparity between the untutored style of the majority, and the relatively sophisticated technique of a minority. No. 107, 'War Scene', for example, shows a woman grieving over her dead husband in a composition heavily indebted to The Angelus by Jean-François Millet.

There is a short section entitled "About the Collection," which contains little more information on the drawings beyond that summarized above. Hence we are given no help in understanding the context in which the drawings emerged, or the link between the drawings, the circumstances of the war, and the mindset of the children. Nevertheless, one might, for example, pose questions on the children's reactions to bombing, how they were evacuated, their new experiences in the colonies – and differences in the way boys and girls perceived the war. By way of comparison, scholars may find it useful to consult the more in-depth studies of children's drawings in wartime by the specialist in the Nazi occupation of Europe, Nicholas Stargardt.1

In short, this is a potentially interesting collection that gives a child's perspective on the war, but from a teacher's point of view, there is very little help in ways of deploying it in the classroom.