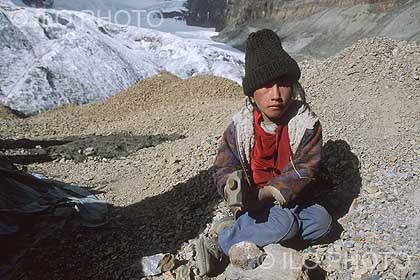 This photograph is of a boy between 6-10 years of age who works in the La Rinconada gold mine in the mountainous region of Peru. La Rinconada is the highest gold mine in the world, 5,500 meters above sea level in the Andes, and under a glacier, and its camp is populated by about 20,000 people who live under economically exploitative and impoverished conditions. The boy seen here works as a quimbalatero, or stone crusher, who quarries ore from gold-bearing rocks by striking them with a heavy hammer.

The image was taken as documentation of child labor by a photographer for the International Labour Organization (ILO) for its International Programme on the Elimination of Child Labour (IPEC) project. According to ILO definitions, unacceptable types of child labor are those that can be harmful to physical and mental development, to children’s dignity, and of a kind that “deprives children of their childhood.” Such child labor should be eliminated if it is mentally, physically, socially or morally dangerous and harmful to children; if it interferes with their schooling by preventing them from attending school, obligates them to leave school prematurely, or requires excessively long and heavy work so as to compromise children's ability to attend school or learn effectively. Mining work such as this meets the criteria as harmful because it exposes child workers to hazards of extreme cold, is physically demanding, and provides no protection for their eyes and hands. Children in mining camps are routinely exposed to mercury poisoning in so-called “artisanal mines,” family mining operations in which whole families are employed, sometimes including toddlers. Such operations often produce tiny amounts of gold by quarrying flakes from large quantities of rock, bringing in very little income for the expense in time and toxic exposure.

A recent ILO Global Report "The end of child labor: Within reach" published in 2006 showed that Latin American and Caribbean countries have experienced declining numbers of child laborers. Projects such as Bolsa Familia in Brazil offers families financial incentives to send their children to school, in addition to citing employers who exploit children, and educating parents and older children on the hazards of child labor. The number of children at work in the region has fallen by two-thirds, with just 5 percent of children now engaged in unsatisfactory child labor. The IPEC project in La Rinconada works to help families access health, education, and nutrition services, and to address working conditions for adults in the mines.