This database contains English translations of thousands of speeches, interviews, and press conferences given by Fidel Castro between 1959 and 1996. This material was originally collected and translated by the Foreign Broadcast Information Service (FBIS), a U.S. government agency charged with monitoring international media. The speeches were then digitized by Radio Marti program of the U.S. Information Agency. While the database does not contain a complete collection of Castro’s public utterances, it does provide substantial materials for students conducting research on the Cuban Revolution.

The collection is quite extensive. There are 15 separate items for January 1959, Castro’s first month in power. And while that number might be above average, it is by no means unique. Even for a relatively uneventful month such as January 1975, there are 13 entries. The entries from the 1960s and 1990s are given headlines, such as “Castro in Interview Attacks Eisenhower.” Entries from the 1970s and 1980s are labeled simply with the date. Users can either browse through all of the speeches, reports, and interviews from a given year or use the “Search” option to look for texts containing specific words.

Students using the database should be alerted to several potential pitfalls. While many speeches are presented in their entirety, others are simply paraphrased in reports and unless the user limits the search to one type of material, queries will yield a list of undifferentiated entries. Therefore, students need to determine whether they are reading Castro’s words or words attributed to him by others. This is particularly pressing since the secondhand accounts of Castro’s speeches are often quite superficial.

There are also occasional problems with translation or transcription. The site’s editors recommend that “[f]or critical research needs . . . users compare the text of FBIS translations with an original source.” Even when using a full-text entry, students should be instructed to pay close attention to the location and likely audience of the speech as these issues of context will shape the text.

Since the Castro Speech Database lacks any supplemental information, students need a basic knowledge of the Cuban Revolution before delving into its resources. That said, the site does have a great deal of potential for classroom use. For example, teachers might ask students to search the database for references to “Che Guevara.” The results should enable students to explore Castro’s symbolic use of this legendary figure. For example, is Che as useful a symbol in good times and bad? Do the meanings associated with Che change as the Revolution shifts priorities?

Similarly, students could look for changes in Castro’s references to the United States. Has his anti-imperialism remained constant over the last four decades? Or students could zero in on a specific moment in the revolutionary period: the “Push to Communism” of the late 1960s or the “Special Period” after the fall of the Soviet Union. Finally, searches for keywords, such as “democracy,” “women,” “blacks,” and “religion” could certainly illuminate certain crucial topics in the history of the Revolution. 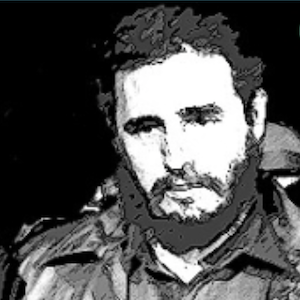 “This database contains English translations of thousands of speeches, interviews, and press conferences given by Fidel Castro between 1959 and 1996. ”