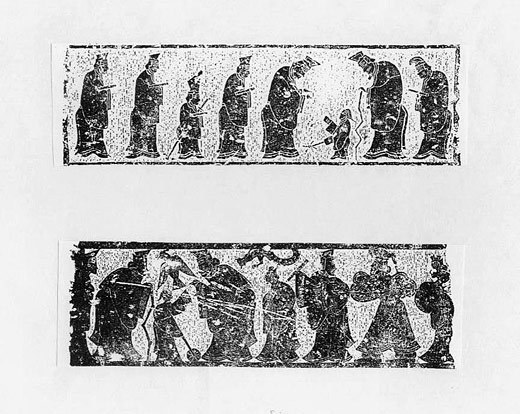 These two images from the Later Han dynasty (2nd century CE) depict the most famous child in early Chinese literature, Xiang Tuo (pronounced She-Ang Too-o). In both stone carvings, which decorated the outer walls of shrines or funerary monuments, the artists indicated Xiang Tuo's tender age by his relatively smaller size with toys in his hands. The great philosophers Confucius and Laozi stand beside him, each man focused on the words of the boy prodigy. Although his image frequently appears on funerary structures, early textual references tell us only that Xiang Tuo was a much younger contemporary of Confucius (c. 551-479 BCE), who at age 7 was able to instruct the Master.

The earliest reference to Xiang Tuo, or any child prodigy, occurs in the 3rd century BCE. From the 2nd century BCE onward, the image of the precocious child begins to figure with some prominence not only in legend but also in biographical portraits of historical figures. The increasing number of Later Han (25-220 CE) references to juvenile achievements also reflect new opportunities created specifically for boys.

According to one set of criteria, boys and girls in the Han reached the age of majority at age 16, at which time they were required to pay the taxes levied on adults; other criteria suggest that boys were not regarded as men until they reached age 21. Still, Han records show that as the dynasty progressed, boys ages 11 to 14 were recommended for government service with greater frequency. In such cases, the selection process demanded a review of a candidate's childhood in order to assess his suitability for recommendation. Boys who assumed official posts at age 13, for example, would have been forced to exhibit a potential for government service at a fairly early age.

Xiang Tuo, continued to serve as an exemplar of precocious wisdom and a model for elite and upwardly mobile boys throughout China's imperial period.