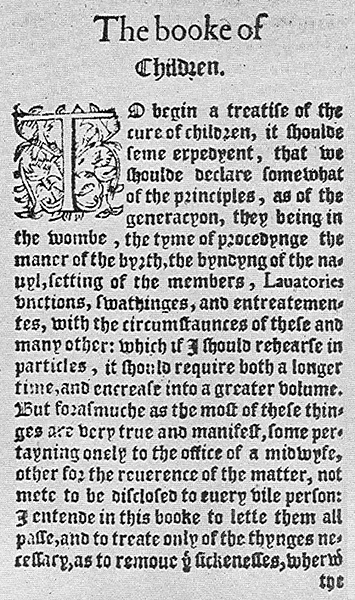 Phaer was a lawyer and a physician who wrote the first work in English devoted solely to the health of children. It was first published in 1544 and went through many editions. The audience for the book according to Phaer was everyone who cared about children. It is a small book of only 56 pages but it covers most of the common conditions that children suffered – from agues or colds to parasitic worms. This section is on head lice and comes at the very end of the book. Lice, like fleas, were endemic in early modern society. Phaer advises the afflicted to avoid certain foods and offers several longer receits or prescriptions. They are not to eat figs and dates (hardly the diet of the poor) and to wash in salty water or brine. A longer receit concerns wearing a cloth around the waist that has been first soaked in pig’s grease and quicksilver, or mercury. Phaer confidently states that lice cannot bear the smell of quicksilver.

Thomas Phaer, Boke of Chyldren, 1545, Children and Youth in History.