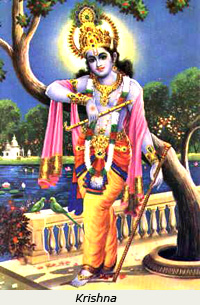 In this poem Mirabai (ca. 1498–ca. 1546) writes of her devotion to her Lord Krishna, which included ecstatic dancing and singing out of sheer love for the Divine. Certainly her behavior was not appreciated by her in-laws, who made many attempts to subdue Mirabai’s passion for her Lord. Here Mirabai is referring to the coloring of her lord Krishna, generally pictured as blue or black. Krishna is an avatar of the Supreme God Vishnu, who is also associated with the color blue, given his association with water. Mira here is making a connection with her own longing which is having the effect of making her ill and thus explaining the discoloring of her complexion. She also writes of the attempt made on her life by a member of the royal household, through poisoning. The Rana (king) simply could not accept her strange behavior, and particularly, Mirabai’s detachment and even rejection of her earthly husband. Just as Krishna had been poisoned by the nursemaid Putana in order to thwart the powers of the infant Krishna, yet ultimately was killed by the child, so too the poison of the Rana could have no adverse effects on Mirabai, except for her discoloring.

Mirabai, I’m colored with the color of dusk, oh rana, Children and Youth in History