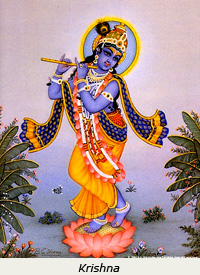 In Caturvedi 42, Mirabai (ca. 1498–ca. 1546), famous devotee of Krishna, speaks of her struggles within the domestic sphere, particularly with her in-laws, as a high-caste woman who chooses to defy conventional expectations and family roles. Here we see how her extended family through marriage is attempting to dissuade Mirabai from her associations with fellow devotees of Krishna. Her in-laws (particularly the king, the rana) are said to have attempted to poison Mirabai who was breaking all societal norms in search of her true love, Krishna. Krishna, here presented as the “Mountain Lifter,” refers to a story of Krishna widely known in Rajasthan, where Krishna held up Mount Govardhan to protect the cattle and herders from the rain-god Indra’s wrath; Indra’s anger was directed at the people of Braj because they turned their devotion away from him and toward Krishna instead.

Mirabai, Life without Hari is no life, friend, Children and Youth in History