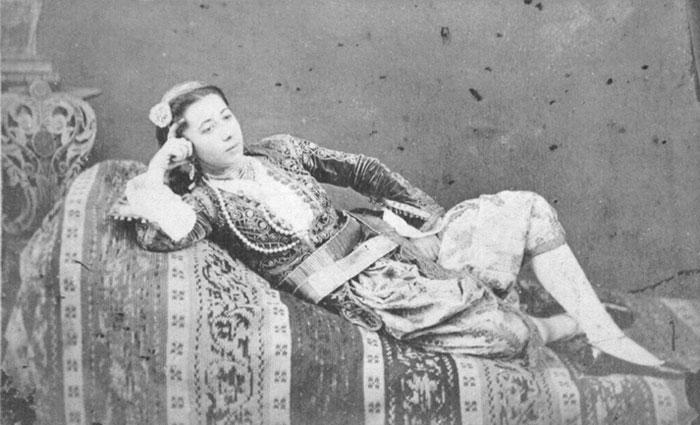 Photography was critical to imperialism. The French army (and the British army in India) employed the camera’s lens to chronicle military exploits, first in Algeria during the 1850s, and later in Tunisia and Morocco. With advances in photographic technology, portrait studios were established in Europe and in European empires. Most studio photography in this period produced family portraits that were staged and arranged by the photographer. However, as the demand for images of non-Western exotic peoples, particularly of women, swelled in Europe and elsewhere, postcards illustrated with posed studio photographs were produced by the tens of thousands.

By the late nineteenth century in Algeria and elsewhere, contrived photographic images of the “Arab woman” or “la Mauresque” [The Moorish woman]—who was provocatively presented either covered or uncovered—were widely produced. Many were done in studios in Algiers (or in France or Europe) and employed the same stage “props”—water pipes, oriental carpets, lavish “traditional” costumes, and allegedly “native” women and men. Often, however, the people posing were not even North African. This image of “Beautiful Fatima” was produced in a studio in Algiers and used as a postcard sent home by travelers or tourists to Algeria. This particular pose does not seem especially offensive, although the languid, fey pose assumed by the woman suggests indolence as well as sexual availability. Other postcards, however, were sexually suggestive or explicitly racist, showing men and women—supposedly Algerian—in a demeaning manner. Visually representing “the” Arab or Muslim or Algerian woman in strange, exotic, or erotic ways served to distance the colonized from modern, enlightened, Western societies, and thus to justify their subjugation under the colonial regime. Thus, images and representations of various kinds have always served imperial aims.