Akan Gold-Weight in the Shape of the Sankofa Bird 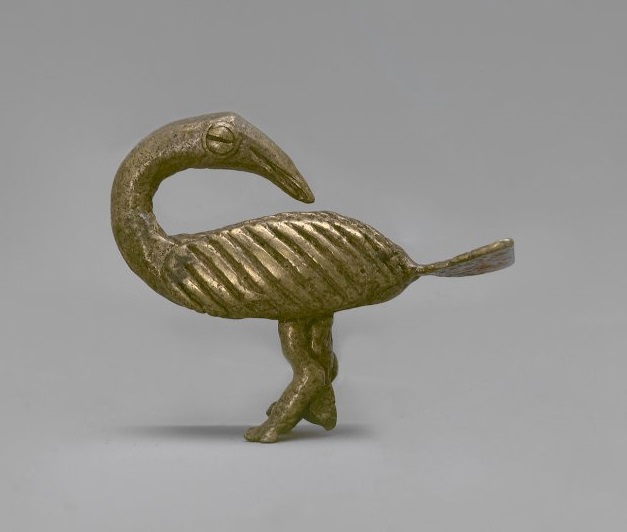 These intricate figurines, made by skilled West African smiths, were measuring instruments central to world flows of capital and commerce through medieval and early modern times.

West Africa was one of the world’s main sources of gold from antiquity onwards. Keeping the location of the region’s gold-fields secret, the great empires of ancient Ghana (6th - 13th century), Mali (c. 1240-1645) and Songhai (c. 1460-1591), and later the Akan states of what Europeans called the Gold Coast, grew immensely rich by controlling the gold trade. For centuries these African states were admired by Muslim and European visitors for both their wealth and their sophistication. African gold traveled both by land across the Sahara to the cities of Egypt and the North African coast, and later also by sea to Europe and the Americas. It supplied the royal mints and treasuries of the Mediterranean kingdoms and Islamic, Portuguese, Dutch and British empires, and financed commercial activities and trade across the world. While over the centuries new sources of gold in the Americas, Southern Africa and Australia affected its relative position in world gold markets, the international gold trade has remained central in the economy of West Africa right up to the present.

Gold-dust allows for more versatile transactions than bullion. West African smiths began to make gold-weights for weighing out precise quantities of the dust in around 1400. The complete apparatus for storing and weighing gold-dust comprised scales, scoops, and elaborate and beautiful boxes as well as the gold-weights, designed as geometric forms, scenes from everyday life, and real or mythical animals such as the sankofa bird shown here, whose backward-turned head represents the proverb “One must turn to the past to move forward.” Most weights were made of brass, typically using the lost-wax technique. African smiths had long been skilled as iron-workers; brass-casting and the lost-wax method may have been introduced with other Islamic techniques and practices as West African states Islamized from about 1000. The gold-weight was first modeled in wax then covered in clay to form the mold; the clay was heated so that the wax ran out, then molten brass was poured into the mold and allowed to cool. Portuguese, Muslim and local trade operated using different metrics, and Akan communities produced weights corresponding to each system. It was crucial that the brass figure weigh exactly the right amount. As the designs were so elaborate a slight mismatch was frequent, so once cast the weight might have to be filed down a little, or otherwise adjusted.

Accurate weighing is a tricky technique, made more difficult in the case of gold-dust because it is both slightly sticky and easily spilled. Brass-smiths made two sizes of scales, one for bigger amounts, the smaller so light and delicate that a breath of wind could disrupt the operation. Akan boys began training in the art of handling gold-dust as adolescents. As well as technical competence, this was deemed a training in personal qualities prized in Akan society: accuracy, steadiness, judgment and even-handedness.

Akan Gold-Weight in the Shape of the Sankofa Bird, Ghana, 18-20th century

"Akan Gold-Weight in the Shape of the Sankofa Bird," in World History Commons, https://worldhistorycommons.org/akan-gold-weight-shape-sankofa-bird [accessed February 7, 2023]