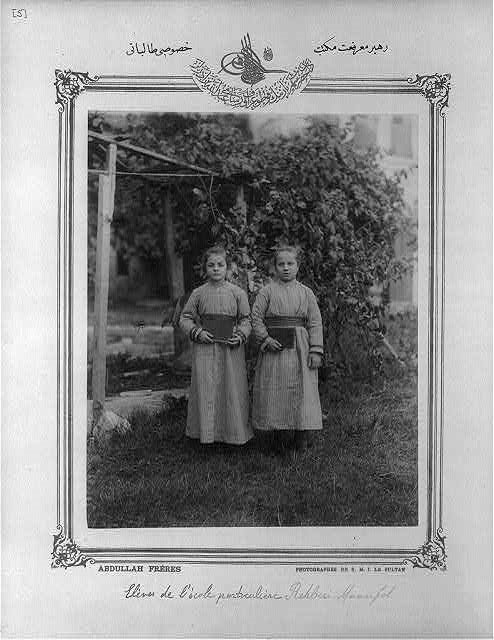 “Teachers and students of the history of children and youth will be particularly taken by the vast array of education-themed photographs, which reveal a strong emphasis placed on schooling by the Ottoman Empire at the time.”

The impressive photography of the Abdul-Hamid II Collection contains 1,819 photographs from the Ottoman Empire. Dated from approximately 1880 to 1893, the images depict scenes within the borders of modern Turkey, as well as Ottoman holdings in Greater Syria, Greece, and modern Iraq. Teachers and students of the history of children and youth will be particularly taken by the vast array of education-themed photographs, which reveal a strong emphasis placed on schooling by the Ottoman Empire at the time.

The photos in this collection were originally presented to the Library of Congress by Sultan Abdul-Hamid II in 1894. Most of the photos promote the Empire's modernization, with institutions such as schools, hospitals, military barracks, medical and law schools, and fire departments featuring prominently. A keyword search on "school" returns 546 images.

One of the most interesting elements of the collection are the many images of school children from the 19th century, particularly in Istanbul and surrounding areas of modern-day Turkey. There are also several images depicting school lessons, with an emphasis on cultural trends, such as physical fitness, art education, and schooling for the handicapped. See, for example, this "Group photograph of the students and the teachers of the school for the deaf."

Scholars and educators will be impressed by the many portraits of school children available in the collection. Using the website’s search function, keywords such as "girl," "boy," and "education" reveal tens of portraits of children in their school uniforms.

One of the more common portrait styles for children is to pair kids together. [Students, orphan school, Darüssafaka] These photos are fascinating primary documents that reveal important social indicators, including schoolboy and schoolgirl fashions (both in terms of uniforms and dress clothing), aesthetic notions about presenting children in portraiture, and elements of class and ethnicity in school populations of the Ottoman Empire.

Another essential element of this collection for those who study children’s history in the Ottoman Empire is the emphasis on modern educational facilities and contemporary methods of education. There are several photos highlighting the modern architecture of educational institutions, as well as images that reveal the scope of children’s education in the Ottoman Empire. Not only are private institutions represented, but mosque schools, orphanages, and schools for the deaf and blind are depicted, along with portraits of children attending these facilities. [Students, school for the blind] Schools for art and various trades are also depicted, and these images reveal fascinating gender assumptions, as it is girls who are attending art schools, whereas boys are taking part in trade school education.

An interesting assignment would be to have students search through the images and compare and contrast elements of the portrait photography. For instance, students could compare and contrast clothing styles, students’ ages and genders, and the types of schools depicted. Then, they could extrapolate upon various elements of Ottoman life in the late 19th century, including topics such as the increasing European influence on the Empire, the role of physical fitness and militarization in education, and the increasing diversity of educational options in the Ottoman polity.

The images are well displayed on dedicated pages, and are available as thumbnails, web-ready JPEG files, and uncompressed archival TIFF files. Full archival citation information is displayed, as well as clear information about how to purchase copies of some images.

The primary drawback of this website is its organization. From the search page users can preview all images, browse Library of Congress subject and format headings or names of creators or conduct broad searches or searches on specific fields. An exterior search engine (similar to Google) reveals a broad subject index, but there is no link from the main page to direct visitors there. This page will lead viewers to a comprehensive index, but without this knowledge, those looking for specific images or topics must rely on the Library of Congress search engine featured on the home page. Because of this flaw, viewers may find what they are looking for but miss related topics.

Despite this flaw, this collection is a rich resource. The photographs provice an excellent sense of the way that Abdul-Hamid II wanted Americans to view his empire. Moreover, the many images of educational facilities, as well as the myriad portraits of school children, illustrate a fascinating connection between education and modernity in the Ottoman Empire and its image projection abroad, one in which teachers and students should find much to explore.