Will-making among the general populace of Bologna during 1348 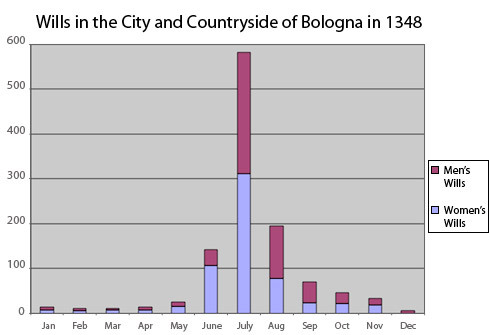 The graph displays the number of wills by gender made each month in the city and countryside of Bologna during 1348 that were copied into the city notarial registers, known as the Libri Memoriali. The graph shows that during the first half of the year there are more female than male testators, which is unusual for medieval Italy. In general, women's wills made up about 40% of all wills, but in Bologna men had the option to make a secret will which they could deposit in the Mendicant friaries and keep out of the public record of the Libri Memoriali. It appears that men chose this option more frequently during the first part of the year, before the epidemic took hold. In order to make a will in medieval Italy, one needed a notary to write up the testator's declared wishes in legal form. In July 1348, there were 185 notaries who redacted wills that appeared in the Libri Memoriali, compared to 85 in June and 89 in August. The majority of notaries working in July (125 out of 185) were writing up only one or two wills, but a smaller group of six notaries wrote up between 10 and 30 wills during that plague-filled month. The notaries went into the homes of most of the testators, the vast majority of whom declared themselves sick.

In Bologna, a member of the clergy, usually a parish priest, had to be present to confirm the identity of sick testators. For every will recorded in the Memoriali, there is at least one priest or friar present as witness. After the redaction they were also required to go with the testator and notary to the public registration of the will in the Libri Memoriali.

Shona Kelly Wray, "Will-making among the general populace of Bologna," 1348.

"Will-making among the general populace of Bologna during 1348," in World History Commons, https://worldhistorycommons.org/will-making-among-general-populace-bologna-during-1348 [accessed October 4, 2022]