Center for the Study of Ancient Documents, Oxford University

The Roman auxiliary fortress at Vindolanda behind Hadrian’s Wall in Britain has yielded one of the most dramatic discoveries of Latin texts in the past century. Excavation of the fort, beginning in 1970, yielded around 1,000 wooden writing tablets discarded by departing troops and preserved in the anaerobic environment of the peat. These tablets record administrative accounts of the garrison, official reports, and most strikingly, personal letters. They were written in ink on thin wood sheets—the first material evidence of this kind of writing in the Roman world.

While the tablets reflect a relatively brief chronological period (2nd century CE) and geographical area (Northern England), the significance of their substance, medium, and historiographical and archaeological stories is remarkable. They offer an unparalleled opportunity to examine and teach the processes of historical discovery in the context of multicultural, non-elite Roman society. The men stationed at Vindolanda were Germans writing in Latin, serving the Roman army in England, and connected through letters to soldiers living across the Empire.

This website offers a complete archive of the tablets including text images, transliterated texts, English translations, historical and archaeological background, and student exercises. A good place to start is a selection of 17 highlights from the collection, including an official account of troop strength, a memorandum on the customs of the Britons, a list of household goods, a letter of recommendation to the provincial governor, an epistolary birthday invitation from the wife of the garrison commander, and a letter from one soldier rebuking another for not writing more often.

High-resolution, zoomable images are available for every document, as is a Latin transcription, an English translation, and a brief commentary on substance and Latinity. The interface is somewhat dated at this point, and it can be slow, but it is still functional. The extensive notes on Latin scripts and the history of the fort are also very useful and somewhat cross-referenced with the documents themselves. A search tool allows the English and Latin texts of the documents and the descriptions of the images to be searched by keyword.

A discussion of the paleography of Old Roman Cursive allows students to practice a different kind of manuscript reading and to discuss the development of the Roman alphabet. (A transcription exercise is available as a teaching aid.) Enough letters survive to, from, and about particular individuals that I often ask students to write extrapolative biographical sketches, a kind of history normally possible for only a few elite members of ancient society. Finally, close reading of the Vindolanda tablets enable students to address questions such as: What constitutes literacy? What makes a text a letter? What kinds of social systems might lead to a culture of writing? What kind of physical and cultural infrastructure is necessary for sending and receiving letters? Such questions are particularly important at a time when the media and formulas of personal communication are changing rapidly. 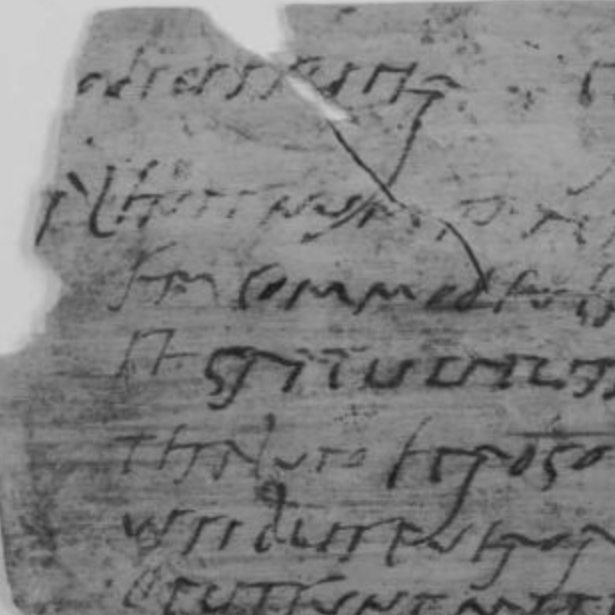 “This website offers a complete archive of the tablets including text images, transliterated texts, English translations, historical and archaeological background, and student exercises.”