The exhibit proceeds chronologically from Hippocrates, the 5th-century BCE Greek physician “credited with developing a system of empirical medicine based on clinical experience,” to René Théophile Hyacinthe Laennec, a leading 19th-century French internist known for developing indirect auscultation. The biographical information that accompanies each author is perhaps best at providing a general introduction to “big thinkers” in the history of medicine and prominent themes both in the history of medicine and world history. These include the rise of “deliberate and repetitive scientific observation,” the intellectual exchanges between thinkers in medicine and other disciplines such as natural philosophy and history, and the global flow of information and ideas.

Users can, for example, trace the ways in which Hippocrates influenced Galen’s formulation of humoral theory, an approach to healing that called for the careful balance of qualities such as heat and cold, moisture and dryness, and bitterness and sweetness, and that provided the basis for the practice of biomedicine well into the 19th century. Similarly, the biographies point to the ways in which Greek science and philosophy were assimilated into the best accounts we have of Roman medicine and surgery, as evidenced in the work of Aulus Cornelius Celsus, as well as into an already vibrant Islamic medical culture as evidenced in the work of 11th-century Islamic doctor and philosopher Avicenna, or Ibn Sina, whose Canon of Medicine dominated medical schools in Europe for 500 years.

Unfortunately, the website’s images are not collected in a central location and many texts are available only in Latin. While this renders these sources less useful in the classroom, there are several works available in English, including three readable pages by 18th-century Scottish surgeon James Lind describing his experiments using citrus to prevent scurvy, and his work treating guinea worm through methods still in use today. In addition, roughly half of the website’s images feature rich illustrations.

Topics that could be addressed through use of illustrations are developments in the science of anatomy and obstetrics. Illustrations accompanying the entries for 16th-century anatomist Andreas Vesalius, whose seminal work was published in 1555, depict “mostly accurate” human muscles, bones, organs, and nerves—correcting many of Galen’s errors. Clicking “next author” at the bottom of Vesalius’s entry calls up a series of illustrations from Vesalius’s contemporary Bartolomeo Eustachi, whose Tabulae anatomicae was not published until 1722, but whose illustrations are at times more accurate than those of Vesalius.

While this website does not provide Galen’s illustrations, or those of 18th-century Italian pathologist Giambattista Morgagni, a founder of pathological anatomy who systematized the study of the relationship between clinical signs and discoveries during autopsy, looking elsewhere for images from these authors could provide fodder for an examination of changes in the practice of anatomy over time, and the systematization of anatomical knowledge.

Several images also depict the professionalization of the practice of medicine, especially through those affiliated with the universities of Montpellier in France, and Padua and Salerno in Italy in the 14th century. For example, the frontispiece from Arnaldus de Villanova’s De conservanda bona valetudine, opusculum Scholae Salernitanae, depicts a hospital scene showing patient care, and workers sharing a meal and engaging in domestic tasks.

While its focus is on the history of medicine, the website is equally as useful for examining the intellectual culture of the Renaissance and the history of printing and the book. As the website’s introduction points out, in the first years of publishing these types of works in the late 15th century, “no real value was placed on “new” or current information.” Thus, the first printed medical books were those of ancient Greek and Islamic thinkers, including Hippocrates, Galen, Aristotle, Avicenna (980-1037). An image from Bernard de Gordon’s Omnium aegritudinum a vertice ad calcem, opus praeclariss, published in 1542, features a title page that has been drawn by hand, indicating that early printers at times tried to imitate manuscripts. Examining Aulus Cornelius Celsus’s De medicina libri viii, published in 1493, users can see that the printers left space enough in the margins to permit hand illumination, and begin to better understand the transition from manuscripts to printed texts. 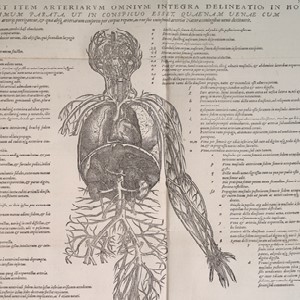 “This website features roughly 200 digitized pages drawn from more than 50 medical books published between 1493 and 1819. The website is structured as a virtual exhibit, presenting a separate page for each of 45 authors, including a brief biography of each.”