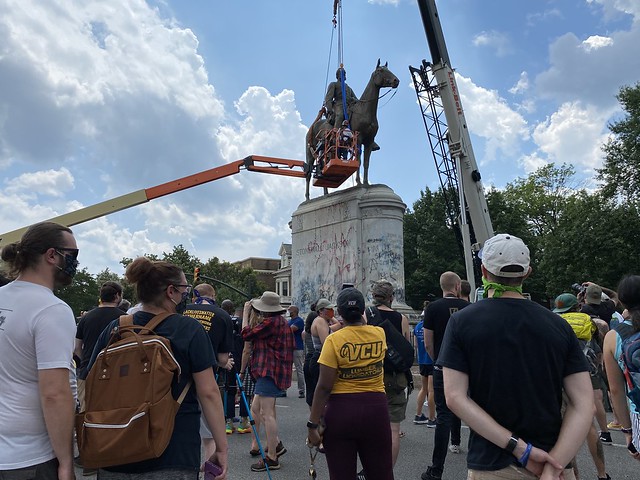 The Stonewall Jackson Monument in Richmond, Virginia was erected in 1919 to honor Thomas ‘Stonewall’ Jackson (1824-1863), a Confederate general. Jackson, a former instructor at the Virginia Military Institute (VMI), gained prominence, and his nickname, for leading a Confederate victory at the 1861 First Battle of Bull Run, Virginia. Jackson owned six slaves at the time of the war. The bronze monument was located on Monument Avenue, on which five statues of Confederate leaders were erected, with public funding, between 1890 and 1925. Following the May 25, 2020, death of George Floyd, a Black man, in Minneapolis, Minnesota while in police custody, for which the police officer was convicted of murder in April 2021, demonstrators targeted Confederate monuments as a form of protest against police brutality and historical injustice towards Black Americans. Some monuments were broken or destroyed by demonstrators; others were removed by government officials, often witnessed by applauding crowds. In 2018 a local government commission had recommended maintaining the Confederate monuments but posting interpretive signs to provide historical context, adding new statues to represent a more diverse history; a statue of the Black professional tennis champion Arthur Ashe had been installed on Monument Avenue in 1996. But in June 2020 Richmond Mayor Levar Stoney ordered that the Jackson Monument along with three other Confederate statues be removed and placed in public storage, where they remained as of spring 2021. The fifth Confederate statue, of General Robert E. Lee, was ordered removed by state officials, but as of spring 2021, a lawsuit brought by preservationists had stopped the removal.