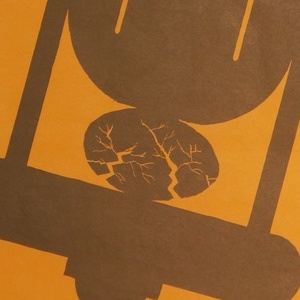 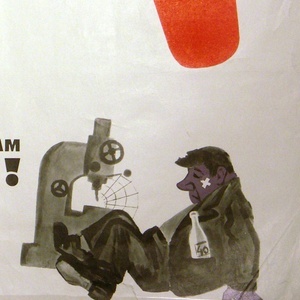 For those teaching the Soviet experience, official propaganda is an invaluable resource. The poster remained the most typical form of propaganda, from the earliest days of the revolution when agitation workers plagued by lack of paper painted their messages directly onto walls and windows to the more established years of Soviet power when monumentalist propagandists forged messages in stone and steel as permanent reminders. For many travelers, the poster work of the Soviets was the first and most arresting signal of their presence in a foreign political landscape.

Hanging on virtually every surface - streetcars, train cars, temporary structures, work break rooms, and infirmary walls - posters were ubiquitous and inescapable for Soviet citizens. They therefore provide an excellent source for analysis of the messages that everyday citizens received from the state.

Posters also provide a valuable source in the study of Russian and Soviet history among American students who have no Russian language skills. Posters in the earliest years of Soviet power were developed with the hopes of communicating to a largely illiterate population; therefore the text is usually simple and often not necessary to interpreting the message of a poster. American students are quite adept at teasing out meanings from posters and can go even further with a quick translation of a poster tag line. Posters slip easily into most every lecture in the Soviet history class, but for students to be able to interpret them, the political and social context of the poster is essential.

These two posters address the increasingly embarrassing and difficult health crisis of the Soviet Union in the 1970s and 1980s. This health crisis was all the more embarrassing to the Soviets because of their promising beginnings in the area of public health. In 1918, the Soviets started the People's Commissariat of Public Health (Narodnyi kommissariat zdravookhranenie or Narkomzdrav). The Soviets were tremendously proud of their creation -- the first comprehensive National Health Service in the world -- and constantly noted the difference of the program and the inability of any capitalist country to provide the same care. Focusing primarily on prophylaxis because of the lack of money for alternatives and the very pragmatic argument that preventing illness is preferable to treating it, Soviet health care started with a flood of propaganda and a push for pre-natal care.

Despite shortages of personnel and goods, the Commissariat found great success making tremendous inroads against infant mortality and doubling the average life span within just a few decades. Soviet assessments of their own success are not always reliable, due in part to different approaches for reporting infant death and other health statistics, major disparities between urban and rural care, and the feminization and deskilling of medicine. Overall, though, the number of doctors per capita and consequent access to care for the average citizen were major points in Soviet propaganda at home and abroad. Examining health care gives students a very real sense of what the system brought the average person and also the limitations of the state and changing priorities of the Stalin and post-Stalinist period.

For years, the Soviets trumpeted their health programs, but this bravado hid an increasing problem. Health care was under funded. This was evident in the 1920s, and worsened further during the Stalin era. In the 1960s, per capita funding of health care fell again. At the same time, environmental factors, the crumbling infrastructure, poor care, and increases in substance abuse led to declining health for the average citizen. In the 1970s, the Soviet Union was the first industrialized country to post a decline in life expectancy and an increase in infant mortality.

While quality of health care declined and environmental toxins increased, these two posters show the consistency of the message begun in 1918 that proper health was an individual choice. They differ, however, in the question of what harm is done by individuals who chose to live in unhealthy ways.

One of Mikhail Gorbachev's most famous reform movements was glasnost' (openness), which allowed partial freedom of the press to address social problems and corruption within the Soviet Union. Among the issues raised during the glasnost' era of the Soviet Union were public health concerns, which became a prominent issue by the late 1980s. Drug abuse, for example, could be publicly discussed for the first time inside the Soviet Union as a result of glasnost'. This poster directly addresses the social crisis created by drug abuse with its simple slogan ("Drug Abuse is Suicide") and its clear picture depicting a needle. The new ideas of the glasnost' era allowed social reformers to represent drug abuse as a personal problem (note the use of "suicide") rather than as a state problem. Drug abuse was a crime against yourself, not against the Communist Party.

This source is a part of the Soviet Health Posters teaching module.

Students could be asked the following:

Reflections:
In the first poster, "Shame to the loafer and the drunkard," (1972) a pantheon of the politically-conscious workers look directly at the viewer – a female laborer (signified by her kerchief tied behind her neck), male worker, and male laborer in coverall (either farm or foundry). While they top the poster, in their red-enhanced background, attention is brought down, through the shaming gesture, to the figure below. Slouching near an idle drill press is the drunkard. Not only is his appearance slovenly, he sports a bandage on his left cheek that could connote either his injury at the bench or his engagement in uncommunal activities (brawling or wife-beating – both associated with drunkenness in earlier anti-alcohol posters).

The image is striking and the use of color intentional. The red-hand represents not just an image of power, but also a political attack. The individual choice of drinking to a stupor is connected here with an offense to the three healthy, strong-eyed faces above. The slogan of the poster also makes a connection to the communal harm done by the single drinker. The "loafer" or "progul'shchik" is one who misses work and slows the pace of the entire factory by taking an extra day off to recover from a drunken weekend or starts the holiday a day early at the expense of the factory quota. His idle drill itself stands in silent protest.

The acknowledgment of drug abuse is an indication of the shifting health problems of the late-Soviet and post-Soviet population. With the fall of Soviet power, health standards continued to deteriorate and citizens of the Former Soviet Union (FSU) were treated to the complete collapse of the health system that had already been in bad shape. Life expectancy plummeted and abuse of alcohol, tobacco, and drugs skyrocketed. The companions of substance abuse – violence, prostitution, crime, infectious disease, and AIDS – contributed to the general decline in public health.

Health is a useful prism for understanding contemporary problems in Russia and the world. Currently, the FSU population is declining at an alarming rate. While the population hovered around 150 million in 1991, demographers estimate that by 2050 that number will have declined by half, making health an important part of the decline of the FSU but also integral to discussions of the modern world and its problems.

Health, and particularly questions of substance abuse, is also useful for leading students into discussions of citizenship, rights, and state powers. The techniques of health care posters lead directly into these discussions by showcasing shame from the collective or harm to the individual in their methods. Health care funding can also bring out discussions of state priorities and the responsibilities of governments to their citizens. Just as the material from these posters can add to discussions in general courses, the techniques of analyzing health can provide methods for working with other questions of political and social organization.

Tricia Starks, is Associate Professor of History at the University of Arkansas and the author of The Body Soviet: Propaganda, Hygiene, and the Revolutionary State, (2008). She coedited Tobacco in Russian History and Culture: The Seventeenth Century to the Present with Matthew Romaniello and is completing a monograph on the cultural history of cigarettes in the Soviet Union. This teaching module was originally developed for the Making the History of 1989 project.