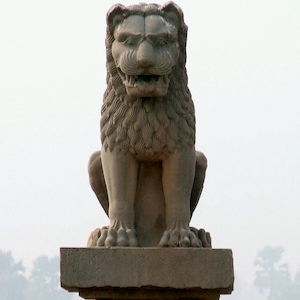 Buddhism is based on the ideas of a north Indian prince, Siddhartha Gautama (fl. ca. 500 B.C.E.), called the Buddha (“enlightened one”), who through meditation gained insight into what he understood were cosmic truths. Prime among these is that life is suffering arising from desire and attachments, but people can overcome their desires and weaknesses by deciding to liberate themselves from them, living morally, being compassionate, and searching for enlightenment through contemplation. The Buddha taught that a life of withdrawal from the world was the best way to lessen desire, but political leaders adopted Buddhism, which allowed it to grow and spread. Among the earliest of these leaders was Ashoka (ruled c. 270-232 BC), who ruled the Mauryan Empire that controlled a large part of Indian subcontinent. Ashoka became a Buddhist at some point in his life, and engaged in a number of actions that promoted the growth of his chosen religious community, for which the sources in this module provide evidence. The primary sources referenced in this module can be viewed in the Primary Sources folder below. Click on the image or texts for more information about the source.