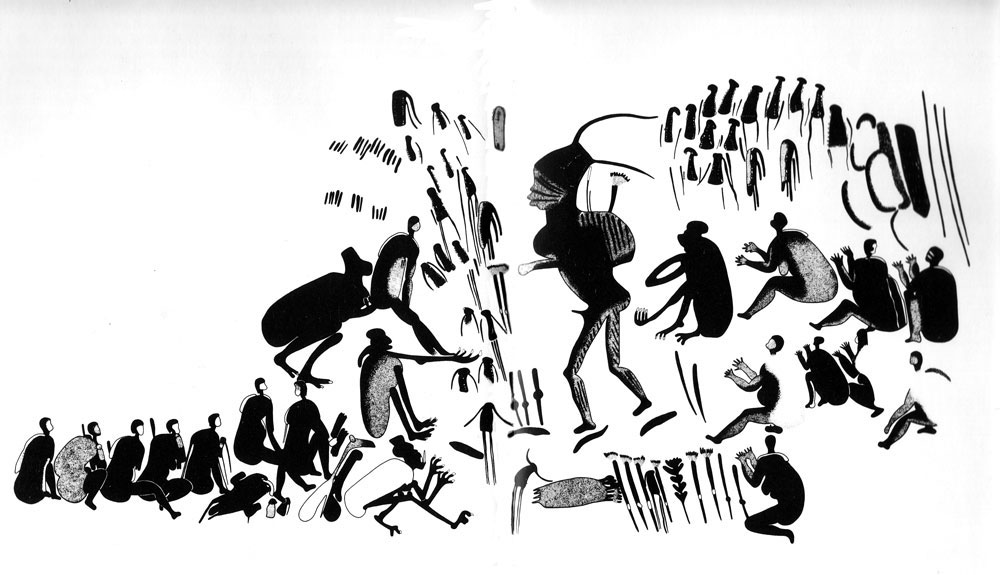 Rock art, found on the walls of caves and on moveable rocks, was once thought to depict simple images of the daily lives of the Khoisan. In the last 20 years, study of oral traditions and close attention to what is actually depicted in the paintings has led to a complete revision of this theory. Now it is believed that the images depict the experience of the trance dance, an integral part of Khoikhoi and San social and ritual practice. The dance was performed with the whole community present, although only a few may have done the dancing—prominently the shaman, or leader of ritual.

It was an extremely intense activity, sometimes performed after smoking dagga (cannabis), where the dancer strains to reach “boiling point” and let his or her spirit transform and get in touch with spiritual forces. In Khoisan belief, there are spirits in the world—particularly connected with animals like the largest antelope, the eland—that can influence weather, communal tensions, and personal problems. As the dancer goes into the trance, he or she hyperventilates, cramps over in pain, bleeds from the nose, and starts to hallucinate. A shaman describes this, also in the symbolism of the rock art, as transforming into the spirit of an antelope or other animal. Women were an integral part of the dance and could take part in the trance, but they are rarely depicted in rock art. Here we see the participants in the clapping circle, together with shapes from the hallucinatory experience, and figures in a state of transformation.

The paintings are extremely difficult to date and the artists are unknown. It is believed that they may have been shamans.