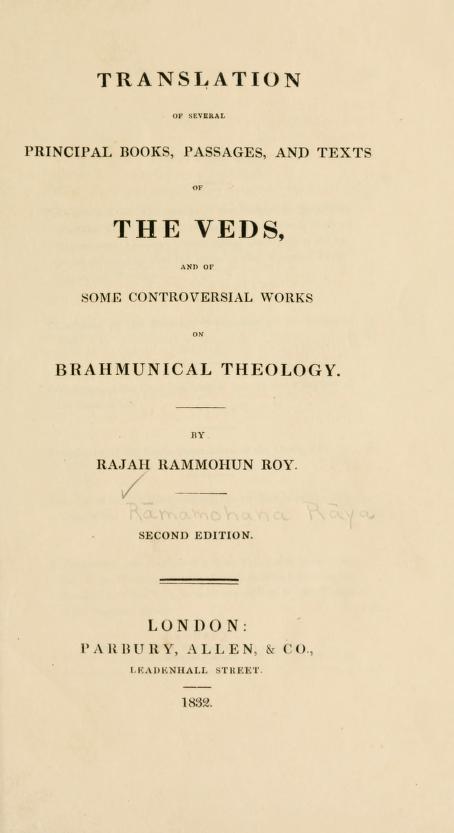 Ram Mohan Roy (1774-1832), a highly educated Bengali brahman from a well-to-do landed family, had worked in the lower levels of the Company bureaucracy. Since Indians were excluded from the elite Indian Civil Service, Roy eventually left the Company service to advocate rationalist religious and social reform among Hindus. He sought to remove what he deemed later additions to Hindu religious practices such as the use of images and to improve the condition and social status of Hindu women. He helped to found the Brahmo Samaj in 1828, a reform society that had weekly congregational meetings patterned after Protestant services and promoted education and greater physical mobility for women. He considered the self-immolation of Hindu widows to be an unorthodox practice British officials and missionaries rightly condemned. His argument that Hindu scriptures did not enjoin self-immolation on Hindu widows was a significant factor in persuading British officials to prohibit sati.

In the first excerpt, Ram Mohan Roy (as the “Opponent”) argued with a generic Advocate of self-immolation by Hindu widows that there was no valid scriptural basis for this ritual. Roy claimed that the mythic lawgiver, Manu, who called for Hindu widows to lead an ascetic life, superseded the quoted injunctions of Angira and other ancient Hindu sages in support of self-immolation.

In the second excerpt, the Advocate of self-immolation provided the rationale for the socialization of Hindu women to accept self-immolation when widowed, and the use of ropes to tie widows to the funeral pyre. Roy, as the Opponent, criticized orthodox Hindu views in particular and of patriarchal views of women in general and argued that, in many ways women are superior to men in virtue, trustworthiness, and control of their passions.