Sir Joseph Banks (1743-1820) was the botanist who sailed with Captain James Cook on his first voyage of exploration into the Pacific region between 1768 and 1771. Banks was one of several scientists on the voyage that began a massive expansion in European knowledge about the Pacific region. In subsequent years, he remained extensively involved in Pacific exploration and early Australian colonial life as well as in other globally-focused initiatives of European science and politics.

This site makes available the papers of Sir Joseph Banks. The collection includes 10,000 manuscript pages, arranged into 19 subject headings. The collection consists primarily of correspondence, principally letters received, but also includes journals, financial records and maps, charts, and watercolors. The journal kept by Joseph Banks on the Endeavour (1768-1771) has been provided in facsimile reproduction, and the other documents in the collection are provided in facsimile reproduction only.

The site is easy to navigate with consistent access to the main menu and the search function at the left-hand side of the screen. It is worth taking note of the tips for navigating within the facsimile reproductions of documents. The tables of contents appear on the left side of the screen.

Banks had extensive colonial and metropolitan interests over his lifespan. As well as his botanical and scientific concerns, he was instrumental in the British government’s 1786 decision to colonize new South Wales. A sense of diversity of his place in the late 18th- and early 19th-century global world of European expansion can be seen through the section titles. They include: each of the three Pacific voyages of James Cook, “Gardeners and Collectors,” “Governors of New South Wales,” the breadfruit voyages of William Bligh (of Bounty mutiny fame and later governor of New South Wales), “The Voyage of George Vancouver to the West Coast of America,” “Lord Maccartney’s Embassy to China,” and “The voyage of Matthew Flinders” (who circumnavigated the Australian continent in 1801-1803). In a rather different vein, the collection also includes letters between Banks and his wife, Dorothea, and between Banks and his sister, Sarah Sophia, with whom he enjoyed a close relationship.

The diversity of Banks’s interest in the global processes of European and political expansion make him a valuable focus in the study of world history. The site’s search function allows students and teachers to develop themes across global boundaries, such as the representation of indigenous peoples by Europeans or the place of botany in European imperial endeavors. The breadfruit voyages of Bligh, for example, were intended to bring a staple from Tahiti to form the basis of a cheap means of feeding slaves in the Caribbean. Banks’s papers weave a web of correspondence across the global interests of British imperialism. The inclusion of Banks’s domestic correspondence gives an added dimension to the study of interpersonal relationships in this period, although, unfortunately, the letters between Banks and his wife and sister appear to be less consistently indexed than other sections.

Teachers wishing to put these documents in context may make use of John Gascoigne’s Joseph Banks and the English Enlightenment and Science in the Service of Empire: Joseph Banks, the British State and the Uses of Science in the Age of Revolution.1 Those wishing to focus particularly on Banks’s life will find a useful biography in Harold Carter, Sir Joseph Banks.2 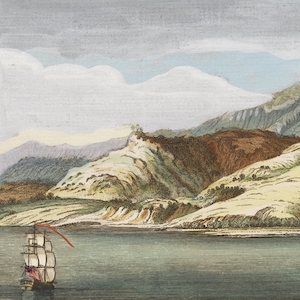 “Sir Joseph Banks (1743-1820) was the botanist who sailed with Captain James Cook on his first voyage of exploration into the Pacific region between 1768 and 1771. ”