Sarah Stanbury and Virginia Raguin, College of the Holy Cross 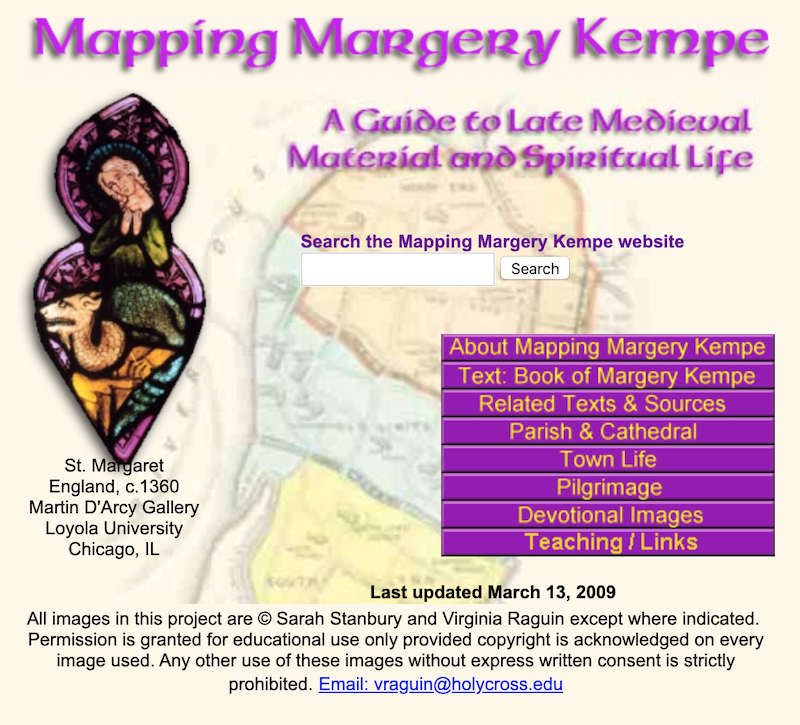 “This website is a collection of resources, particularly strong in visual content, that examines the social context in which Kempe produced her narrative.”

Margery Kempe, an early 15th-century woman who desired to live a spiritual life, composed what is often recognized as the first English autobiography, The Book of Margery Kempe, in 1438. Kempe was married, the mother of 14 children, and illiterate, yet she attempted to lead a monastic life of religious devotion within the secular world, taking a vow of chastity in mid-life. In her spiritual journal, dictated to a scribe, Kempe described her mystical visions, her spiritual travels, and her impressions of secular life. She also detailed the trials she faced as a mystic whose authenticity was deeply suspected by both her peers and her clerical supervisors. This website is a collection of resources, particularly strong in visual content, that examines the social context in which Kempe produced her narrative. The site provides a complete transcription of The Book of Margery Kempe in English along with ample secondary material establishing the historical background of Kempe’s biography, her spirituality, and the historical era. The site includes lengthy biographical introductions to Kempe by several different authors, and a substantial glossary of terms, places, and people mentioned in her writings. There are links to dozens of related sites and biographies of 10 contemporary figures with whom Kempe personally interacted or who influenced her intellectually and spiritually. These range from Augustinian Friar John Capgrave to the 14th-century mystic, Bridget of Sweden. One of the most impressive section of the site is found under the “Parish & Cathedral“ link. Here, a database of hundreds of images illustrating the material culture in which Kempe existed is amassed. There are maps of parishes, architectural drawings, and photographs of hundreds of chapels, priories, cathedrals, images, and liturgical furnishings that Kempe knew and visited. The “East Anglia Database“ is a particularly rich collection, visually documenting the religious institutions of that diocese. One shortcoming of the site is that it lacks a comprehensive search tool that would allow viewers to locate specific issues in Kempe’s text and connect these to the other types of sources available at the site. Instructors will find Kempe’s book, as well as the in-depth contextual sources, an intriguing historical resource they can use to encourage students to explore such historical topics as the social construction of religious piety and heresy, and 15th-century perceptions of marriage, family life, and theology. They could also use Kempe’s story to study the sometimes surprising types of spiritual powers women like Kempe could claim, even in periods in which they are often perceived as being virtually powerless. The site also includes an extensive bibliography and a helpful teaching resource guide that contains specific suggestions for constructing class assignments. These include the creative recommendation that students examine the visual iconography associated with saints depicted at the site and compare that iconography with written portrayals from their life stories in order to analyze the features emphasized and omitted in pervasive visual representations. Finally, the site’s copious images could be used to encourage students to think about how visual frameworks helped shape past peoples’ secular and sacred imaginations in a period when the vast majority of the laity, like Kempe herself, were illiterate. Instructors might also encourage students to use material from the numerous visual sources contained at the “Badington” site in the East Anglia database but also in the “Devotional Images” collection and search for ways that particular elements of the art, architecture, and decoration of this church allowed lay people like Kempe to develop particular pious expressions that were not always consistent with orthodox doctrine.