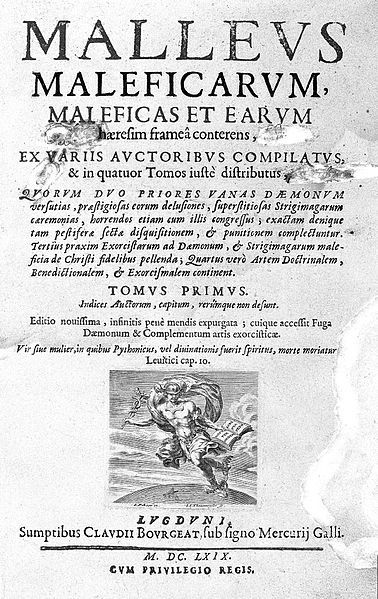 Perhaps the most spectacular manifestation of early modern European discrimination against women was the conviction of thousands of women for witchcraft. Over three centuries, more than 40,000 people were executed as witches, 75 percent of them female. The greatest witch hunts occurred from the 1550s to the 1660s in the Franco-German borderlands, areas wracked by the religious struggles of the Reformation.

The following excerpt comes from the most famous manual for witch hunters, the Malleus Maleficarum (Hammer of Witches) written in 1487 by a Dominican monk, Heinrich Kramer (1430-1505). The Pope appointed Kramer an inquisitor in 1484, with the mission to eliminate heresy in southern Germany. Kramer moved ruthlessly to do away with witches, who were believed to gain evil powers through pacts with the Devil. Written to justify his actions, Kramer’s manual presented witchcraft as a growing threat to Christianity, arguing that witches not only used their powers against common folk, but also led Christians to perdition. Kramer also argued that women were particularly susceptible to the crime because of their inability to control their passions, a commonly-held viewpoint. Although never officially accepted by the Church, Kramer’s work greatly influenced secular magistrates across Europe; it was they who ordered the execution of the majority of so-called witches.