The Lula Institute, the European Network for Democracy in Brazil, and University Paris-Est Marne-la-Vallée

Lines of Struggle: Letters to President Lula functions as a small repository for letters that were sent to former Brazilian president Luiz Inácio Lula da Silva (2003-2010) during his incarceration under alleged charges of corruption. Throughout his 580-day prison sentence (which only came to end in December of 2019) Lula received thousands upon thousands of letters from his supporters, a number of which have been archived on this site. Being the brainchild of an international collective of historians supported by The Lula Institute, the European Network for Democracy in Brazil, and University Paris-Est Marne-la-Vallée, the site itself is similarly international as it can be accessed in English, Portuguese, Spanish, and French. The Introduction to the site mentions an Italian translation as well, but that does not seem to be available just yet.

The site is of remarkably simple and clean design, with only 4 tabs for navigation. The Home / Introduction page provides a short write-up about the website and its background, while below that, users can find a map of South America (also linked to via the Map of Letters tab) with clickable points. With each point leading to a letter from that particular region, this helps users to better visualise where these sources are coming from. On a design front, the map could have done with a bit more detail with regards to delineating the states within Brazil, but overall, this is still a useful visual tool.

As flagged by the site-owners, these letters are a means to capture a type of ‘history from below’, or history as seen by the everyman. Given that Lula’s some two decades in power were characterised by reforms that broadly sought to improve the quality of life for Brazilians, the letters found on Lines of Struggle help to further explore what that really meant to people on the ground – these ranging from the 70-year old illiterate farmworker who had to dictate his letter, to teachers, doctors, and historians.

That being said, it is worth noting that only a relatively small number of letters are currently available. The overall content of the site is thereby unfortunately a bit thin on the ground, and instructors using the site as a teaching resources might find it helpful to note the limited nature of this site to students, or highlight the potential difficulties that this will pose to historical research. Nevertheless, instructors of all levels will definitely still find much of value on Lines of Struggle as it remains a helpful launchpad into wide-ranging discussions, these including but not limited to: populism, ‘reading against the grain’, and how history can be read from a slew of different perspectives. In this instance, Lines of Struggle functions best if used alongside other academic sources, or as a means to illustrate the real-world implications of political events. 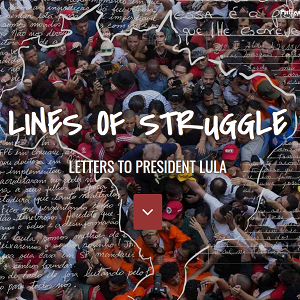 “As a primary source, the letters offer an interesting and in many cases, moving glimpse into individual stories, feelings, and hopes that might not have necessarily been captured by larger, top-down historical narratives.”