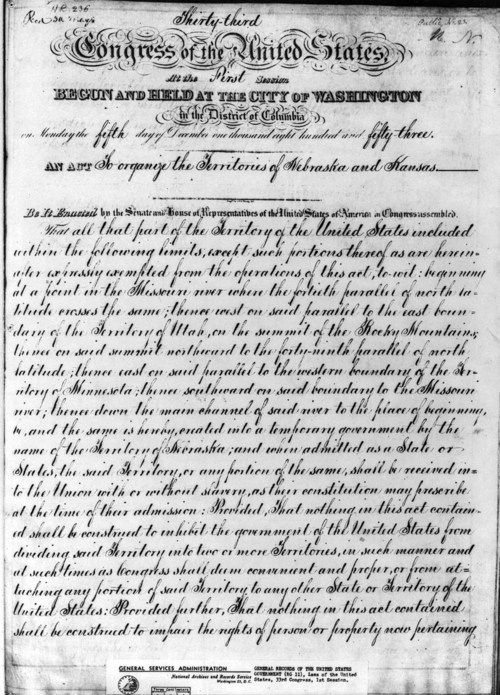 By the 1850s, tensions in the United States were falling in around a major issue: slavery. As the country expanded relentlessly westward and more territories and states were coming into existence, the question of slave states versus free states grew in its intensity. Previously passed in Congress was the 1820 Missouri Compromise, which drew a line from east to west along the 36th parallel, dividing the nation into competing halves—half free, half slave. The decades following the Missouri Compromise saw the further industrialization of the country, including the proposal of a transcontinental railroad. Free states wanted the route of the railroad to pass above the 36th parallel, while slave states wanted the railroad to pass through well below the 36th parallel. Senator Stephen Douglas, a chief promoter of the railroad and supporter of a northerly route, introduced a bill that would organize the massive territory that then encompassed the modern-day states of Kansas, Nebraska, Montana, and the Dakotas under “popular sovereignty.” This would essentially leave the question of slavery up to the individual states and their state constitutions and sparked massive controversy both in Congress and out in the territories. However, the Senate voted to pass Douglas’s bill in what would become the Kansas-Nebraska Act of 1854, sparking a violent uprising between proslavery and antislavery settlers of the new states known as “Bleeding Kansas” and setting the stage for national civil war.