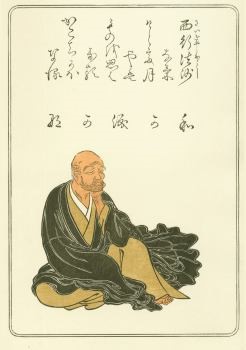 “Perhaps the greatest contribution of this site is its search engine, which enables the reader to search multiple texts, in English, for common topics or phrases. This feature makes these literary texts very useful to historians locating references on specific topics.”

This site makes available the classic texts of Japanese literature. Although a few of the texts are translated into English, most are digitized transcriptions of original Japanese texts. Consequently, the site is especially for scholars who can read Japanese literature in its original language.

Several groups of texts have been translated into English and may be of interest to world history teachers. The first is a selection of poems from two of Japan’s ancient poetry anthologies, the Kokin Wakashu and the Hyakunin Isshu. The former also includes English-language commentary, which will very helpful for teachers and students attempting to learn the conventions and themes of ancient Japanese poetry. The second is a selection of 13 Noh plays and the third is a sampling of poems by Masaoka Shiki (1867-1902), a poet who sought to revive interest in traditional forms of Japanese poetry while adapting them for a modern audience.

For scholars of Japanese literature and history, especially those without ready access to these texts in print form, the site is extremely useful. It contains more than 50 texts, including such well-known works as Murasaki’s 11th-century The Tale of Genji, Chikamatsu’s 18th-century drama Love Suicides at Sonezaki, and Futabatei’s Floating Clouds, a 19th-century work often considered to be Japan’s first modern novel. Available works constitute a broad sampling of the Japanese literary canon. The site continues to add new texts each year with the ultimate goal of providing a comprehensive online library of Japanese literature.

The site is simple to use. From the home page, which is available in both English and Japanese, the user can link to a chronological list of texts. (Reflecting the focus on specialists, this chronologically-organized list does not provide dates of the works; the user is expected to know when the works were written in order to find them on the list). The site also links to online Japanese-English dictionaries, so that the reader can look up the meaning of Japanese words while reading online texts.

Perhaps the greatest contribution of this site is its search engine, which enables the reader to search multiple texts, in English, for common topics or phrases. This feature makes these literary texts very useful to historians locating references on specific topics. As the number and range of texts increase, including English translations, the site will serve as an invaluable resource for world history teachers and students, as well as scholars of Japanese literature and history.