An Inquiry into the Causes and Effects of the Variolae Vaccinae 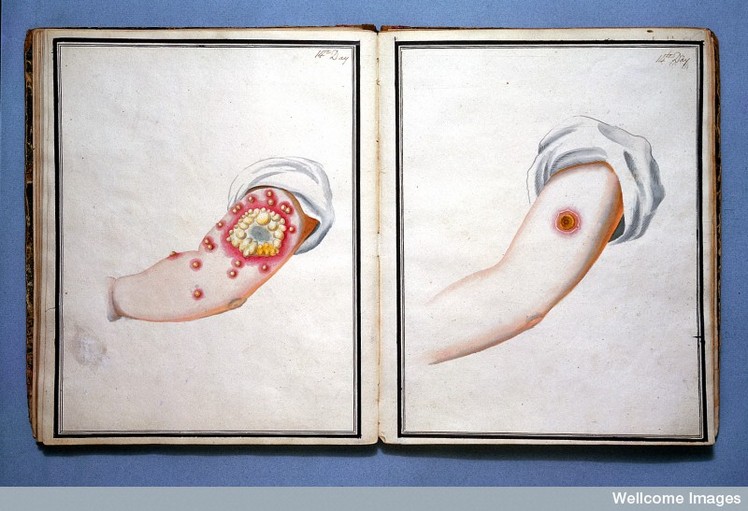 Edward Jenner (1749-1823) was a physician in rural Gloucestershire. Like Lady Mary Wortley Montagu he learnt of a widely known folk remedy to protect against smallpox. Smallpox cases were increasing in the 18th century and had a mortality rate of 40%. At least 30% of those who survived were left horribly scarred. Smallpox was a disease of children and youth in particular. However, dairymaids and farmers believed that those who had contracted cowpox, a mild infection often found on the udders of cows, would not get smallpox. Jenner's interviews with local farmers led him to carry out a series of experiments using cowpox matter, or lymph (fluid), taken from the vesicles of cowpox on the hands of the dairymaid Sarah Nelmes. In May 1796 he inserted the lymph in the arm of a young boy called James Phipps who promptly came down with cowpox. In July Jenner inoculated Phipps with smallpox matter but he remained healthy and did not get the disease. Jenner carried out several of these experiments on villagers and the children of his servants before he published his findings. He called this new method of using cowpox to protect against smallpox, vaccination from vacca, the Latin word for cow. In fact historians now have evidence that local farmers had carried out this procedure before but Jenner was the first medical man to publish his findings on cowpox as a preventive remedy against smallpox in An Inquiry into the Cause and Effects of the Variolae Vaccinae, a Disease Discovered in Some of the Western Counties of England, Particularly Gloucestershire, and Known by the Name of the Cow-pox. Vaccination was not accepted quickly by all but it gradually became more popular as it was less risky than inoculation. The watercolor drawing shows the profound difference in the severity of infection caused by inoculation with smallpox as recommended by Lady Montagu versus vaccination with cowpox as recommended by Edward Jenner. Vaccination became compulsory in Britain in 1853.

"An Inquiry into the Causes and Effects of the Variolae Vaccinae," late 18th century to early 19th century.

"An Inquiry into the Causes and Effects of the Variolae Vaccinae," in World History Commons, https://worldhistorycommons.org/inquiry-causes-and-effects-variolae-vaccinae [accessed August 9, 2022]