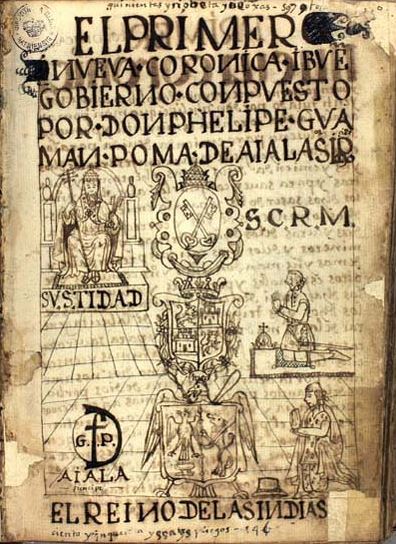 “This digital version of Guaman Poma’s manuscript provides teachers and students with an opportunity to think about the relationship between events and the way that they are recorded, and about the materials that historians use to interpret the past.”

This website, maintained by the Royal Library of Denmark, contains the digital version of a manuscript completed in 1615 by a native Andean, Felipe Guaman Poma de Ayala. He wrote his Nueva corónica y buen gobierno or New Chronicle and Good Government to provide the Spanish king with an Andean perspective on colonial Peru. Guaman Poma wrote about pre-conquest Andean history and also described what he saw as the damaging effects of Spanish colonization on native society. This website has images of the manuscript’s 1200 pages, including 398 drawings. The introduction to the site includes a two-paragraph description of the manuscript and a picture of the binding of the original edition, a glossary-index of Quechua terms and concepts (in Spanish), an onomastic index (in Spanish), and an ethnological index of topics related to indigenous people (in Spanish). The site includes an essay by Rolena Adorno, a professor of Latin American literature at Yale, who also helped create the site’s table of contents and table of drawings for the manuscript. These are in English and Spanish. There is information about the digitization project, and there are links to other scholarship about the text.

Rolena Adorno’s essay describes the manuscript and puts it into context by discussing the Andean colonial world, Guaman Poma’s life, his reasons for writing, and the European and Andean influences on his writing and drawings. The essay has links to maps and specific parts of the manuscript so that Adorno’s points can be easily applied to the text. The essay is clear and provides enough information to allow people with a basic understanding of Latin American history to access the manuscript. The manuscript is in Spanish, so English readers might consult Letter to a King: A Peruvian Chief’s Account of Life under the Incas and under Spanish Rule, a translation by Christopher Dilke.1 Dilke spells the author’s name “Huan Poma.”

This site presents challenges for teachers hoping to use it as a primary source in the classroom. The nueva corónica is handwritten in a 17th-century style which can be difficult even for Spanish readers. While looking at the handwritten text might give students a sense of the challenges of research, most teachers will find the 398 illustrations more useful. Guaman Poma drew images of European and Inca rulers and scenes of Inca and colonial life. The images of the post-contact period are especially useful for teaching about cultural contact and Spanish colonialism. These images show the diversity of people in the colony, including European priests and royal officials, indigenous nobles and workers, African slaves, and mixed people of different classes. They also depict the colonial hierarchy, with Spanish officials, priests, and settlers in charge of indigenous workers and African slaves. Many of Guaman Poma’s images show Spanish abuses of indigenous people through overwork and punishment. Teachers could ask students to discuss what ideas Guaman Poma was conveying through these images and how different colonial people might have interpreted them. Students could discuss the role of the author in writing history. Guaman Poma wrote to expose Spanish abuses and the injustices of colonial life, as well as to record the history of pre-Hispanic Andean society. Teachers could ask students to compare Guaman Poma’s account of colonial life to the accounts in their textbooks or to excerpts of Spanish accounts such as Pedro de Cieza de Leon’s The Discovery and Conquest of Peru.2 How do Guaman Poma’s opinons affect his depiction of precolonial and colonial life? Is it possible to create a text that represents all sides of a story? This digital version of Guaman Poma’s manuscript provides teachers and students with an opportunity to think about the relationship between events and the way that they are recorded, and about the materials that historians use to interpret the past.