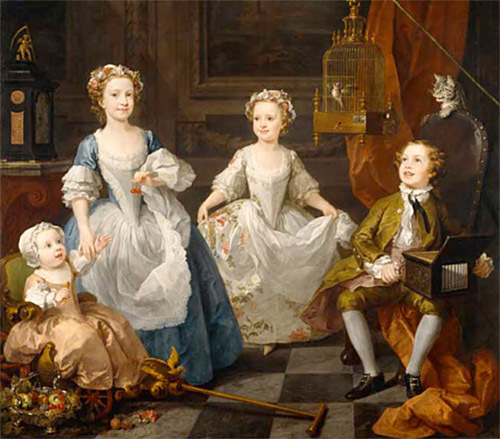 This beautiful life-size painting of four children is by William Hogarth, who also specialized in engravings such as Gin Lane. It was commissioned by Daniel Graham, a rich apothecary (pharmacist) to the royal family and to Chelsea Hospital in London. It shows Daniel's three children by his second wife, Mary Crisp, and Mary's daughter, Henrietta, by her first marriage. The children are (from left to right) the infant Thomas sitting in a gold-leaf gilded go-cart (age 2); Henrietta in a blue dress holding two cherries (age 9); Anna Maria in a flower-print dress (age 5); and Richard who plays the sérinette or bird organ (age 7). Hogarth was a patron of the Foundling Hospital in London and painted portraits of many of the children there. His skill led to commissions such as this one.

At first glance Hogarth literally paints childhood as a time of innocence and happiness. But there are clues that point to the fragility of children's lives. The clock on the mantelpiece is decorated with a figure of Cupid holding a scythe, a symbol of death. Standing beside it is an hourglass, yet another symbol of mortality. The cat gazes greedily at the caged bird to remind us that there are predators even in such a happy scene as this. In fact Thomas died while Hogarth was completing the portrait and what we have here is a posthumous representation of the infant, as if he was still alive at the age of two. The crossed carnations at Thomas's feet symbolize that like flowers, his life faded quickly, while the dove on the go-cart may represent his soul flying to heaven.

William Hogarth, "The Graham Children," 1742, Children and Youth in History.