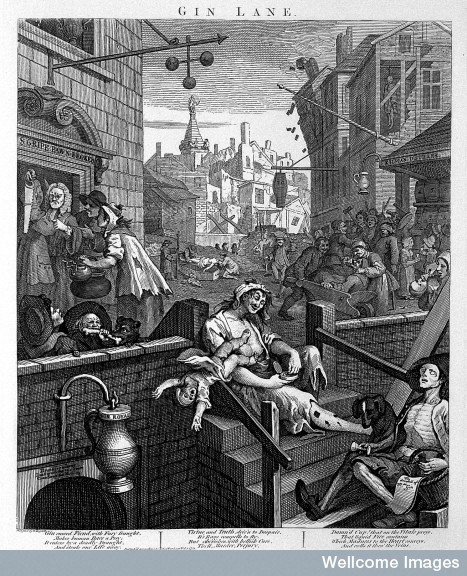 This is one of the best-known prints by the famous artist, William Hogarth. He designed it to support the British government's attempt to regulate the price and popularity of drinking gin (known as Geneva) in the Gin Act of 1751. The print is accompanied by the following verse:

Gin, cursed Fiend, with Fury fraught,
Makes human Race a Prey.
It enters by a deadly Draught
And steal our Life away.
Virtue and Truth, driv'n to Despair
Its Rage compells to fly,
But cherishes with hellish Care
Theft, Murder, Perjury.
Damned Cup! that on the Vitals preys
That liquid Fire contains,
Which Madness to the heart conveys,
And rolls it thro' the Veins.

Gin had originally been marketed as a medicine for upset stomachs in the Netherlands. It was imported into Britain after 1689 and quickly became the choice drink of the poor. Many distilled and sold it from their homes. Some historians claim that by 1750, one out of every fifteen houses in London sold it. Children would often be sent to buy gin for their parents and sampled it themselves. It was also regularly given to calm babies. Hogarth shows here the poverty, public drunkenness, and crime, which resulted from the cheap availability of gin. The most shocking figure in Gin Lane is the drunken mother. She may be partially based on a real person, Judith Dufour. Due to the mother's neglect, the two-year old child had been taken from her and placed in a workhouse. Dufour reclaimed her child and shortly afterwards strangled it and left the body in a ditch. She sold the clothes that the workhouse had provided the child for a few pennies, and then used the money to buy gin. Dufour was publicly hanged for the murder.