Federal Constitution of the United Mexican States of 1857 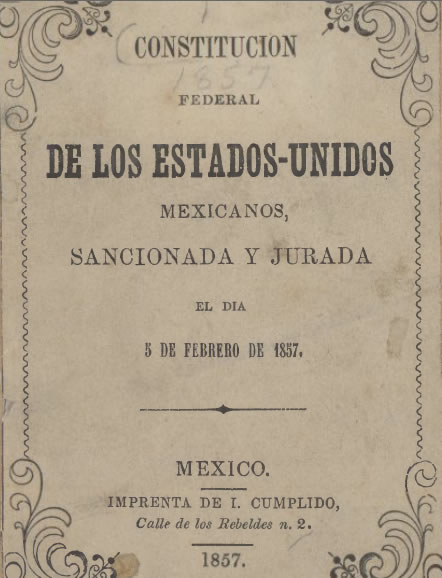 The Federal Constitution of the United Mexican States of 1857 was a liberal constitution. It replaced an organic law of 1836 that had given dictatorial authority to President Antonio López de Santa Anna, who was overthrown after selling parts of Sonora and Chihuahua to the United States in the Gadsden Purchase. Ratified on February 5, 1857, the Constitution established individual rights such as freedom of speech, freedom of conscience, freedom of the press, freedom of assembly, and the right to bear arms. In these aspects and in the construction of a federal government, with authority divided between legislative, executive, and judicial branches, and between the central government and various states, the 1857 Constitution closely resembled the U.S. Constitution. It also reaffirmed the abolition of slavery, and cruel and unusual punishment, including the death penalty, and emphasized rights of private property, but prohibited ecclesiastical property-holding other than buildings of direct church usage. This was one of several articles contrary to the interests of the Catholic Church, such as education that was free of dogma. Conservatives representing a majority of the Mexican states strongly opposed the enactment of the new constitution. The Reform War began as a result, with the liberals winning on the battlefield over the conservatives. The losing conservatives sought another way back into power, and their politicians invited Maximilian of Mexico, an Austrian, to establish a Mexican monarchy with the support of the Church and the Second French Empire, whose military forces invaded Mexico in 1862. The republican government-in-exile was led by Benito Juárez in the United States as the legitimate Mexican government. With the ouster of the French and the defeat of the conservatives in 1867, the Restored Republic was again governed under the 1857 Constitution. It remained as Mexico's constitution until 1917, although many of its provisions ceased to be enforced.

Federal Constitution of the United Mexican States of 1857