Excerpt from The History of Mary Prince 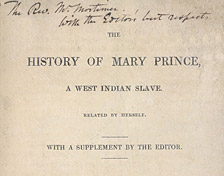 “The History of Mary Prince, A West Indian Slave Related by Herself” is first-person account was written by British abolitionists and disseminated through the London Society for the Abolition of Slavery in 1831. The source covers the three distinct areas of work: plantation work; housework; and work for other enslaved people. Mary Prince was mainly involved in making salt on behalf of an owner. Both men and women (as well as young children) are indiscriminately used in gangs that bail water, turn a press, and shovel the end product. The enslaver directly supervises enslaved people and cruelly disciplines them. In reading this source, students are encouraged to think about how enslaved women (like Prince) and white abolitionists (like those who sponsored the publication of her history) might have had different investments in constructing women as being “naturally” unsuited for certain types of labor. This source is a part of the Slavery, Labor, and Gender teaching module.