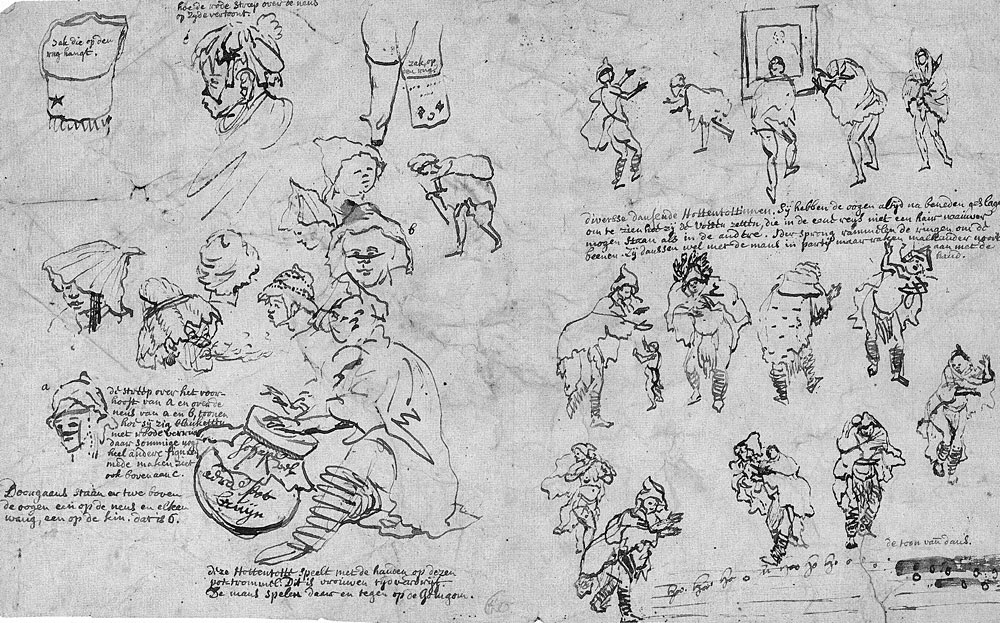 In the late 17th century, an anonymous artist did a series of impromptu sketches and set pieces showing Khoikhoi at the Cape of Good Hope. The artist seems to have been interested in capturing natural movement and depicting actual articles of Khoikhoi clothing or activities in which they engaged, rather than falling back on the stereotypes that tended to be perpetuated in European books about the Cape. But the sketches are not entirely spontaneous, since the women in some of the scenes are clearly posed in classical ways. In addition, the artist seems to have had a tendency towards allegory as he juxtaposed wrinkled and crippled old women with voluptuous young women. The depiction of young women, which sometimes seems deliberately sexualized, also raises questions about how independent an observer the artist was.

On the left side of the page, the artist shows different types of hats, facial painting, and the hide bag carried by the Khoikhoi, as well as a woman playing a drum made by drawing a leather hide over a clay pot. On the bottom of the right side of the page, the artist carries on the theme of dancing, including the notes of the chant he has heard. The lines around the legs of the women indicate the leather anklets they commonly wore. On the top of the right side of the page, Khoikhoi men and women appear to be reacting to an image in a frame—probably a mirror. The scene is not explained by the handwritten notes, but a selection from 1660 Journal of Jan van Riebeeck provides an interesting parallel: “Later on, when the said servants [of a Khoikhoi chief]—the one called Oocktis Koukoa and the other Hanhumma, herdsmen of their King’s cattle and sheep—were led to a large looking-glass in the Commander’s room, they were obviously very much alarmed, at first thinking they were looking at people in another room, and then, when they recognized themselves and other people reflected, they imagined that they were seeing spirits. Such a state were they in that Eva, Doman, and some other Hottentots living in the fort were hard put to it to bring them back to their right senses again.” The notes explaining the scenes were added at a later date by someone other than the author.