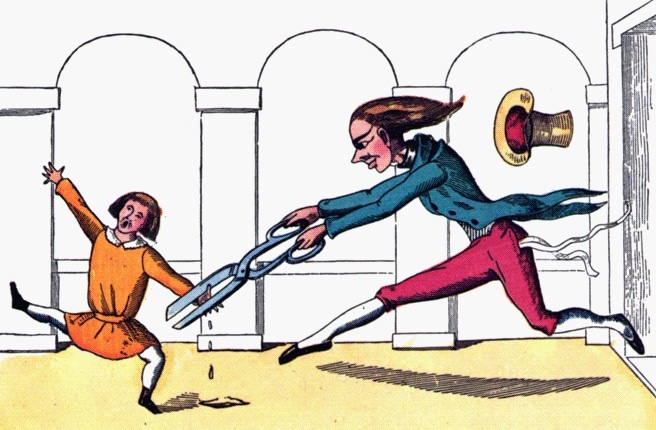 Published in 1858, Der Struwwelpeter (Shaggy Peter) is a German children's book first published anonymously under a different title in 1845 by Heinrich Hoffman. Hoffman, a Frankfurt physician and father, wrote the book after realizing that there were none he wanted to buy for his 3-year-old son for Christmas. The first English translation was published in 1848. While living in Berlin with his family in 1891, Mark Twain translated the book he gave to his three daughters for Christmas. According to one, her father had been motivated by his close identification with the children in Der Struwwelpter. Twain's American version, Slovenly Peter, was published in 1935.[1]

The 10 cautionary tales told in rhyme are accompanied by vivid illustrations of boys and girls in nightmarish scenarios. The cartoon-like illustrations depict the dire consequences of such disobedient and unwise behavior as: poor hygiene, cruelty, playing with matches, bullying, thumb sucking, eating poorly, fidgeting at the table, and not paying attention while walking. While many German parents today find the tales disturbing, those who raised their children during the early decades of the 20th century found them useful for childrearing. Parents' mention of a specific character in Der Struwwelpeter kids knew well served as short-hand criticism of objectionable behavior.

What happens to disobedient children who suck their thumbs when told not to is illustrated in four panels. In the third one, Conrad's thumbs are about to be cut off by the tailor because he did not listen to his mother warning him not to suck his thumbs while she went out.

Students might analyze the text as well as the images in regard to issues of gender and race. (For bullying a boy of color the bullies are dipped in black ink.) The book could also be compared to other proscriptive stories from different periods, nationalities, and cultures. Another rich avenue for research would be to examine children's varied reactions to Der Stuvwwelpeter.

A version of the American translation, Struwwelpeter: Merry Tales and Funny Pictures, is available on The Project Gutenberg EBook.