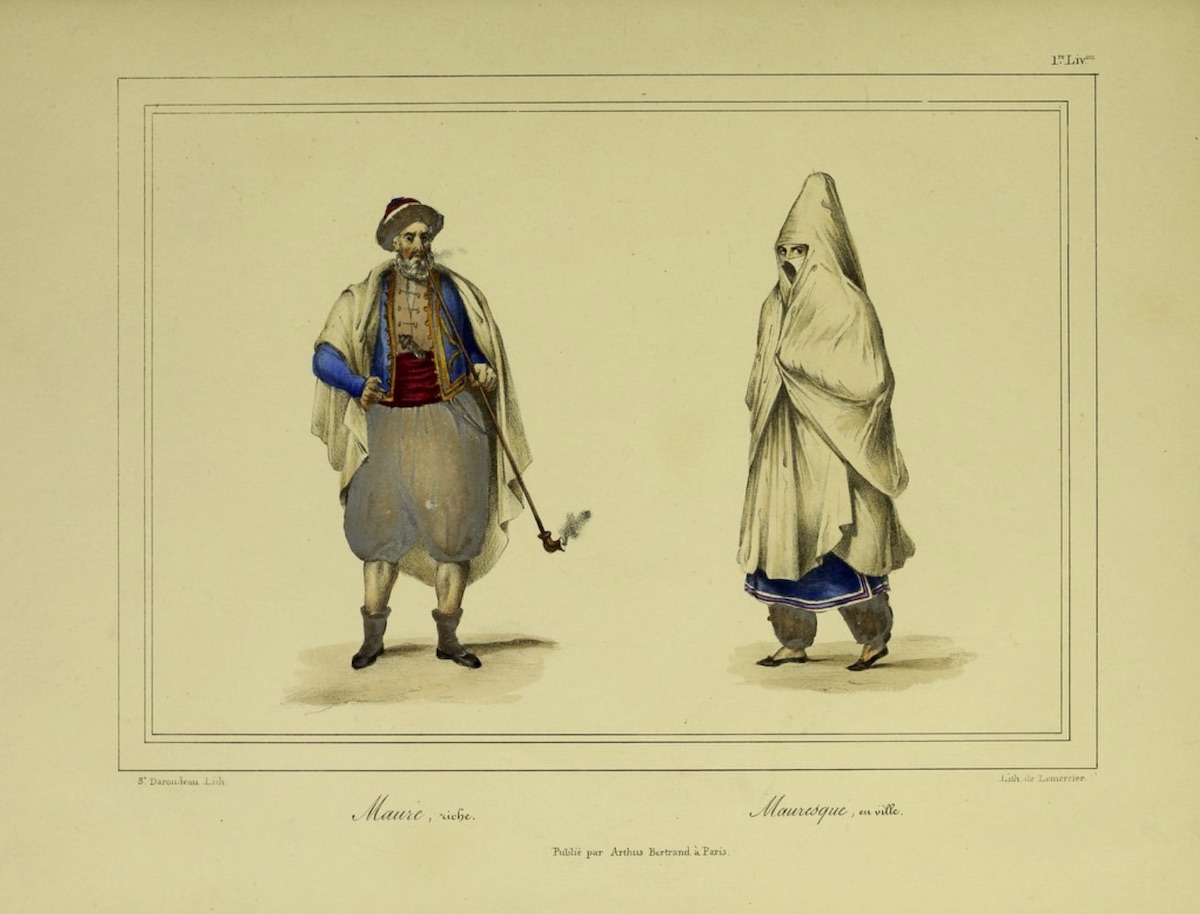 One of the first tasks undertaken by the French military after the 1830 invasion was to visually depict, and thus classify, places, things, and people so as to rule more effectively. This is a pattern seen in all modern colonial regimes worldwide. To this end, in addition to cannons, rifles, and supplies, the French expedition also included a cohort of skilled artists and draftsmen. Since photography had not yet been invented, military draftsmen portrayed Algerians of all social classes and ethnic, racial, or religious backgrounds. The women of Algiers—rich and poor, Jewish and Muslim—were a favorite topic. These two paired images were done by a military officer, Claude Antoine Rozet (1798-1858), are among the earliest colonial representations of Algerian women since they were published only three years after the invasion. The first is entitled A Rich Moor [Moor meaning an Arabic-speaking urban dweller] and Moorish Woman in Algiers with a Head Covering. The second set of images is entitled Moorish Artisan and Moorish Woman in Algiers—it being understood from her costume that she, too, is from the artisan class. And indeed, clothing and costume served as critical markers distinguishing different social, political, or cultural groups from one another in Algeria.

In his illustrations of, and writings about, Algeria’s peoples, Rozet and other military officers attempted to construct a racial taxonomy, even as they admitted that the country was made up of extremely heterogeneous elements and that the notion of “race” did not traditionally exist, nor was it applicable. Eventually the colonial regime in Algeria constructed a hierarchy of privilege and difference, enshrined in French law, based in large part upon racial categories. From this resulted a body of jurisprudence that locked colonized peoples into a system of legal dispossession and inequality. Finally, the image of the “Moorish woman” endured until the 20th century, mainly as an exoticizing—indeed eroticizing—label imposed upon Algerian women, whose images were reproduced in colonial picture postcards by the tens of thousands (see document number five, below). Most of these representations were studio portraits constructed in such a way as to give the sensation of a sly, illicit glance into the intimacy of the Muslim household’s interior, which was increasingly open to imagined public view by the end of the 19th century.