The Chinese Text Project is the largest database of pre-modern Chinese text digitally available, and is open access to researchers around the world. It focuses specifically on pre-Qin and Han dynasty works, as well as post-Han dynasty texts. These works include some images, poetry, philosophy, and other academic subjects like mathematics and military sciences that are written in a variety of dialects, including Old Chinese and Han Chinese. Some texts include English translations, and the site itself includes a dictionary for the Chinese characters used and their translation into both Mandarin and Cantonese. As you read the texts, the website also allows you to highlight the characters to show definitions, context, associated characters, and even information about the number of brush strokes for the character.

These features all allow for a variety of analyses to be performed on these works, including linguistic analysis of both word usage during the periods of focus, as well as analysis of writing itself by paying attention to the brush strokes. It also allows for scholars to study how the ancients and their descendants viewed their own history, as the website contains historical scholastic commentary of some of the historical texts that the website documents.

Although the website was last updated in 2016, there are still active discussions happening about the sources in the forums that are also included on the website. These forums discuss a variety of aspects about the sources, from their context, to issues with translation or interpretation for the source metadata. The forums and discussions work in a similar fashion as Wikipedia, with each source having its own discussion board, and forums being used to discuss broader subjects, and ask questions. Unlike Wikipedia, it doesn’t seem to have a vetting or verification process for people commenting on potential discrepancies and answering questions. The site is geared toward a more focused research audience, rather than a casual student or viewer, which as a result can make it difficult to navigate. However, the website as a whole provides an excellent repository for pre-modern Chinese texts, and a window into the values and culture of that time and place. 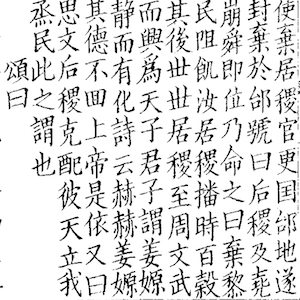