BRITISH CARTOON ARCHIVE AT THE UNIVERSITY OF KENT 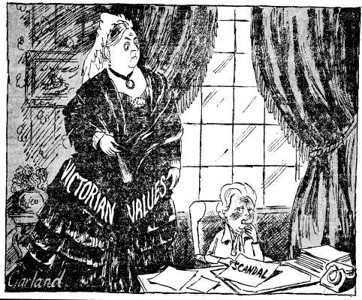 “This site provides students and teachers alike with a way of enlivening their approach to British political and social history. The website has a huge amount of material available, and it is well organized to help the researcher find cartoons from a particular cartoonist, or on a particular theme.”

Cartoons is a website produced by the British Cartoon Archive, a collection based at the University of Kent (England), dedicated to cartooning in newspapers and other forms of publication in Britain over the past century. It has a collection of around 150,000 cartoons drawn by approximately 300 cartoonists. This site provides students and teachers alike with a way of enlivening their approach to British political and social history. The website has a huge amount of material available, and it is well organized to help the researcher find cartoons from a particular cartoonist, or on a particular theme.

The alphabetical list of cartoonists in the Biographies section will include some names familiar to anyone brought up in Britain – and many others they will never have heard of. Fortunately the names of the most famous ones (and the most important newspapers that published them) are specified in the Search section, which helps to orientate the researcher. The site gives a brief biography of each artist, written with a nice light touch. For example, we learn that Barry Fantoni was thrown out of Camberwell School of Arts and Crafts in 1958, accused of "wrecking the home of one of the teachers in a state of drunken madness." Fortunately for him, he was able to continue at the renowned Slade School of Art, and achieve fame and fortune as a pop artist as well as a cartoonist. A particular feature of the Archive is the Carl Giles Collection donated by the artist in 2005. This reviewer must confess to looking forward to seeing his cartoon in the Sunday Express each week during the 1950s and 1960s. His most famous creation was the Giles Family, a "bizarre fantasy," according to the biography, "of a working-class household living a comfortable middle-class life." The outstanding character was surely Grandma Giles, a ferocious looking character whose "anarchic vitality" led to her being heavily into drinking and betting. Also familiar to many will be the figure of Andy Capp, drawn by Reg Smythe under orders to appeal to readers in the north of England. Andy Capp, according to the biography of Smythe, emerged as the "flat-capped, pigeon-fancying, beer-swilling, work-shy northerner," with views on marriage going back to the "Neolithic Age."

The Search facility allows one to choose among numerous subjects. Each cartoon includes: a reference number, caption, embedded text (picking out detail not easily read in the reproduction), notes, the people depicted, and the subjects covered. The very abundance of the material may be a problem, especially as much of it will probably not appear useful to the modern reader. Searches will bring up thousands of results with different levels of relevance. The researcher will need to sift through the material to separate cartoons focused on their search term in particular from those with only a passing allusion.

The site includes advice on creating a group of cartoons as a teaching pack, to illustrate a particular theme. It provides a number of these but it is doubtless best to create your own, as the site advises. The site also points out in a section on Teaching Aids that "sophisticated searching" allows one to see, for example, what was happening on a specific day in history, by assembling all the cartoons that appeared in the newspapers on that day, or to grasp how politicians or major personalities (such as Princess Diana, with 321 entries) were perceived. This section promises five "resource packages" linked to themes in the British schools curriculum, and resources to help in the reading and analysis of cartoons. There is a section on Articles to help the teacher or researcher, though it remained obstinately stuck on "G" whenever consulted by this reviewer.

Overall, it is clear that a great deal of thought and effort has gone into making the vast collection of material available to the public, and into supporting the cartoons with relevant background information. The standard of presentation and the layout are excellent. It will need an awareness of the political stance of the newspapers involved to make much sense, and a feel for popular culture in Britain. Still, it is a cornucopia of delights.