The Ancient History of the Maori 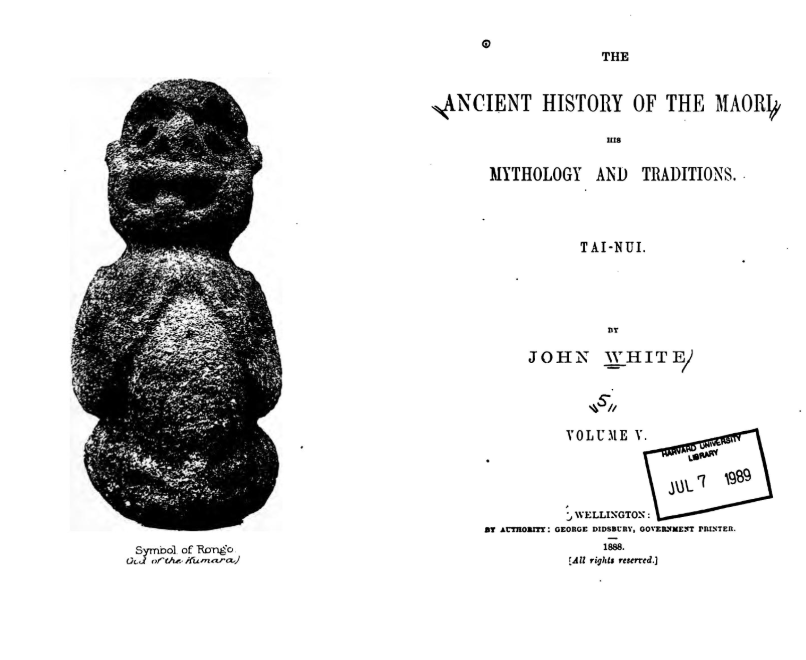 In this excerpt, an adult Horeta Te Taniwha recounts childhood memories of a cultural encounter with Europeans for a Pakeha researcher. Te Taniwha, as an indigenous child of Aotearoa/New Zealand, participated in one of the first meetings between coastal tribes and the British maritime explorer, Captain James Cook, and his crew. These interactions were written up contemporaneously in Cook's journals and recorded by the artists and gentlemen of science on board Endeavour during its first voyage to New Zealand (November 1769 – March 1770). The published accounts and images would have influenced subsequent European perceptions of Maori people, just as later indigenous responses on island communities throughout the Pacific Ocean would have probably been affected by oral stories of earlier events. Early 19th-century missionaries and linguists successfully developed Maori as a written language but narratives such as this one by Te Taniwha would still be told in Maori and then translated, sometimes with a choice of English terms that had no Maori equivalent. Hence monsters (taniwha) and gods (atua) were part of traditional Maori cosmology but goblins were not. Horeta Te Taniwha recounted his boyhood experiences several times for different researchers with very little inconsistency.

This source extract can invite discussion about the issues to be considered when using adult recollections of childhood, or the influence of a translator's choice of words. Primarily, though, it provides scope for analyzing a relatively rare glimpse of how an indigenous child of Aotearoa/New Zealand first experienced cultural encounter. His frame of reference is Polynesian, of the Pacific, not European. The norms against which he notices similarities and differences are those of his Maori culture (as it had evolved within Aotearoa) and his particular tribe. Auditory perceptions are noticeable: his was a society with no written language but great mastery of detail since the transmission of tribal knowledge and tradition was primarily through chants, oratory, and song.

This source is a part of the New Zealand Childhoods (18th–20th c.) teaching module.

"The Ancient History of the Maori," in World History Commons, https://worldhistorycommons.org/ancient-history-maori [accessed May 23, 2022]