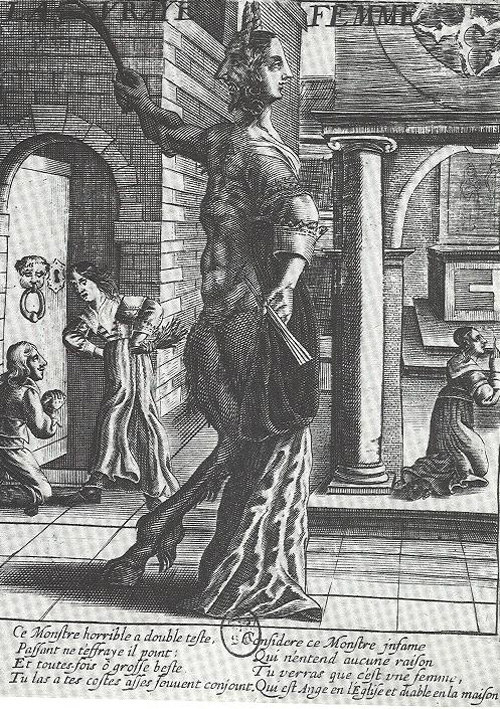 This is a 17th-century French engraving entitled The True Woman. Although its author and its circulation to the public in general is not precisely known, engravings such as this one were ever more popular in the 16th and 17th centuries, when the power of the newly-invented printing press to reach the masses became apparent. Engravings are another tool that helps historians gauge common views and attitudes held in the early modern period, when the majority of the population remained illiterate and pictures were really worth more than a thousand words. Although the picture speaks for itself, the engraving includes a poem, intended to drive home the picture’s message:

This horrible double-headed monster,
Passing, does it not frighten you?
However, o great beast,
Your two sides are often one.

Consider this infamous monster,
Who does not hear any reason,
You will see that it is woman,
Who is an Angel in Church and a devil at home.

Both the engraving and the words are representative of the common belief in early modern Europe that women had a double nature, being simultaneously angels and demons. The depiction also reveals a second contemporary concern: one’s inability to tell from outer appearances a person’s inner nature. Such concerns were echoed in the period’s witchcraft craze, in which fear of women’s potential power to disrupt peace and order manifested itself in violent attacks against them.