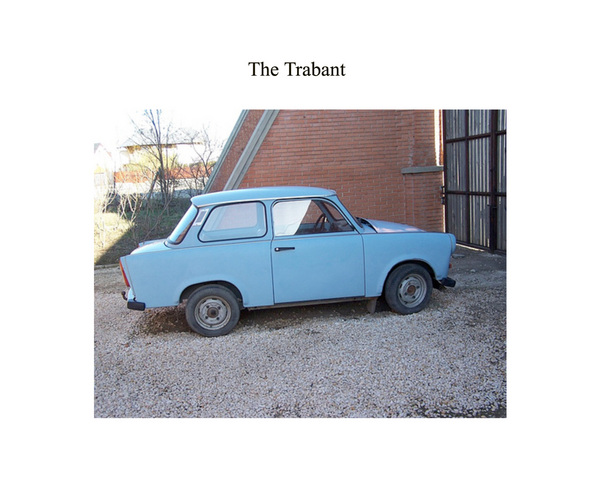 For many in the West the Trabant automobile was one of the symbols of the economic differences between Eastern and Western Europe. When the Hungarian government opened its borders in the late summer of 1989, tens of thousands of East German citizens streamed westward, many of them driving or riding in “Trabis” as they were known. While Westerners scoffed at the cars, both because of the Duroplast (plastic) bodies and the smoky, weak engines, for the East German regime, the Trabant was a symbol of modernism and socialist efficiency.

From the perspective of those managing the East German economy, the use of plastic material, which in the 1950s was a very modern idea, symbolized the forward-thinking nature of Communist planning. Moreover, the use of Duroplast meant that the government could use its steel production for things other than the manufacture of personal transportation. Ironically, given how many Trabi jokes there were in the 1990s, automobile manufacturers today are using more and more plastic material in cars, both because it is less expensive than steel, and because it does not rust. Also, from the perspective of the central planners in charge of the economy, an automobile was a means of transportation, not an extension of one’s personality, and so the many luxury features found in Western cars were completely unnecessary—functionality was what mattered.

While the Trabant was intended to be a symbol of the efficiency and forward thinking nature of Communist economic planning, the reality was that East Germans typically had to wait as long as two years, if not longer, to purchase a Trabant because the government was unable to produce the cars fast enough to keep up with demand. Trabants have made a comeback of sorts today, both as collector’s items, but also as a concept—small, light, inexpensive, fuel efficient automobiles are very popular items more almost 20 years since the last Trabi rolled off the assembly line—something that must seem ironic to those responsible for creating, building, and maintaining the Trabant in the first place.

Professor T Mills Kelly, "The Trabant," Making the History of 1989.