Solidarity Election Flier, “How to vote for Solidarity in Żoliborz” 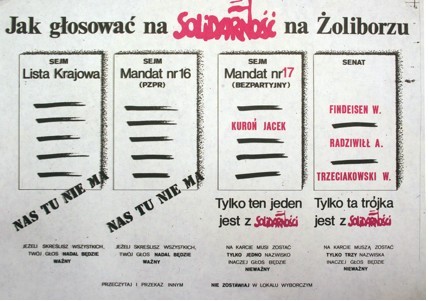 The flier above, directed at voters in the town of Żoliborz, illustrates the complexity of the elections held on June 4, 1989. Looking at the sample ballots from left to right, Polish voters faced: 1) a “national list” for the Sejm (Lower House of parliament) made up of leading dignitaries running unopposed; 2) candidates for those seats in the Sejm that were reserved for the governing coalition (Communist party plus small satellite parties); 3) candidates for those seats in the Sejm that could be contested by Solidarity and independents, as well as supporters of the regime; and 4) candidates for the Senate, where voters could choose several names from a range of Solidarity, pro-regime, and independent candidates. Government supporters hoped that voters, faced with such a sprawling set of choices, would tend to endorse candidates based on name recognition. Solidarity’s task was to turn the election instead into a referendum, in which voters would systematically select those affiliated with the opposition and cross out those affiliated with the regime. On the ballots on the right, Solidarity candidates are helpfully printed in red. The ballots on the left bear the admonition “We are not here,” meaning that all candidates listed could safely be crossed out.

Remarkably, most Poles got the message. Very few of “them” (the pro-regime candidates) survived the first round, while almost all of “us” (those endorsed by Solidarity) were swept to victory.

This source is a part of the Solidarity Comes to Power in Poland, 1989 teaching module.

“How to vote for Solidarity in Żoliborz,” 1989, Polish Poster Gallery.