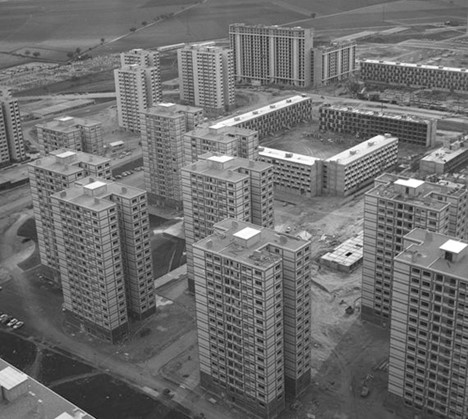 In addition to La Duchère, other social housing developments in greater Lyon included Les Minguettes in Vénissieux, where 9,200 units for 35,000 residents were constructed between 1966 and 1973, and the 8,300-unit Mas du Taureau, built between 1970 and 1980 (in addition to La Grappinière, with a population of approximately 30,000) in Vaulx-en-Velin, east of Lyon.  Taken together, the population of these three communities alone comprised nearly 100,000 low-income individuals surrounding Lyon.  Deemed a “failure” by 1983 due to impoverished conditions, they were demolished.  However, many of the same problems, such as a lack of jobs, stigmatization, and discrimination, persisted.  A renewed effort to physically reshape the banlieues continued into the early 2000s.