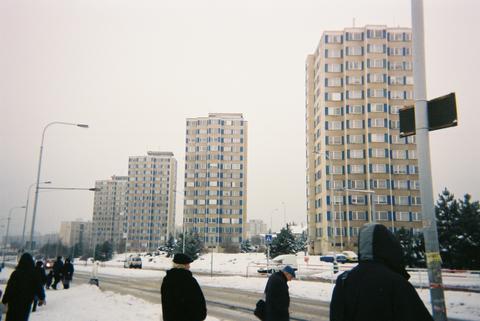 During the first half of the 20th century shortages of hygienic, affordable housing were common in Eastern Europe. Following World War II, Communist leaders worked to resolve this social problem—one that grew graver as collectivization of agriculture during the 1950s forced millions of people to migrate from the countryside to cities.

Their solution was the construction of massive, high-rise, multi-unit, pre-fabricated, concrete apartment buildings throughout the region, called panelaks (or paneláky) due to their panel construction. Generally, panelaks had a homogeneous, uniform appearance, that lowered construction costs and also aimed to support the Communist aesthetic of undifferentiated men and women living in a mass society of equals. The limited size of apartments units, in which often more than one family lived together, and their being stacked in rows one atop another, led Czechs to call them "rabbit hutches".

Panelaks were large apartment buildings that were commonly built within far larger units, known as housing estates. These housing estates consisted of several panelaks, stores, restaurants, cultural centers for entertainment, playgrounds, and schools. In some cases, the design of these estates was sincerely intended to help society, and following the deprivations before and during World War II for many Eastern Europeans, especially those in the older generation, they were signs of Communist progress and benevolence. But they were not always built using solid materials or constructions techniques, a fact that led some to question the true substance of that progress and benevolence.

This photo shows some of the very many panelaks where millions of Eastern Europeans lived during the Cold War (and many still live—some happily—today).

"Panelaks and Housing Estates," Making the History of 1989.