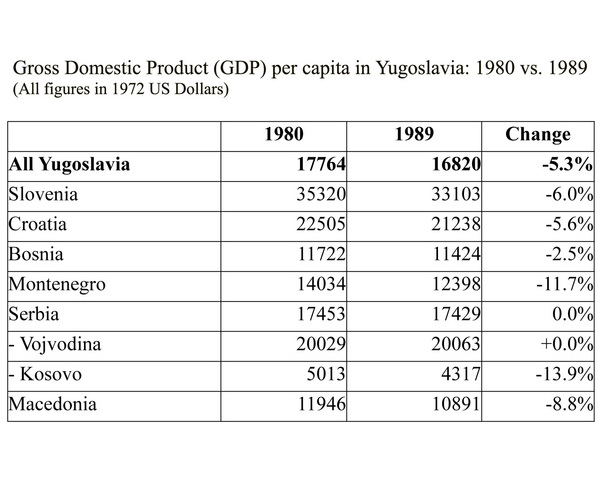 This table shows two developments in the former Yugoslavia. The first is the decline in the Yugoslav economy during the 1980s. Much of the world experienced an economic recession in the early 1980s, but in Western Europe, North America, and especially Asia (including Communist China) economic conditions had improved substantially by the end of the decade. By comparison, economic conditions in Eastern Europe continued to worsen as the decade neared its end.

This table shows not only how the Yugoslavia suffered a drop in GDP per capita of more than five percent during the decade, but how unevenly this drop was experienced within the state. Yugoslavia was a federation of six republics and two „autonomous regions“ (Kosovo and Vojvodina were ruled by the Serbian government but had a high degree of local autonomy). One glance at this table shows how significantly different the economies of the various republics and regions were. Slovenia had a GDP per capita that was like any that might be found in the smaller economies of Western Europe, while the Kosovo province of Serbia was perhaps the most economically backward in all of Europe. How might the decline in Yugoslavia’s economic fortunes and the economic disparities within Yugoslavia have contributed to the breakup of the state in 1991-1992?